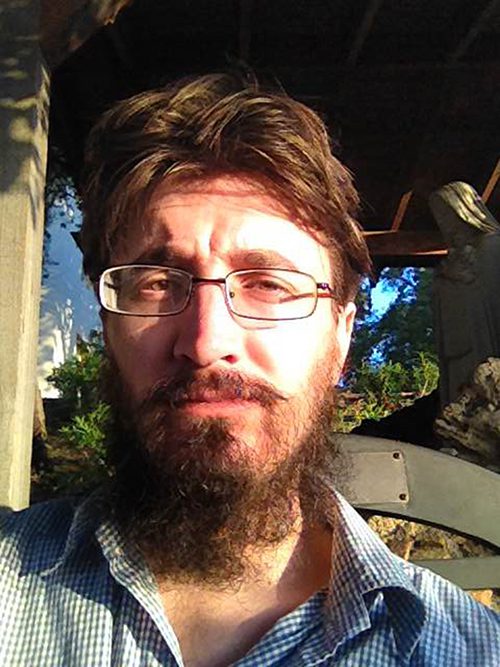 LISTENING AT THE EDGES

I hid in the church after they left. Some of the stained glass had been broken, and the plain sunlight bled into the colored shapes around the pew.

The dust smelled like tired earth. I felt my body go limp, unwilling for the moment to obey me. I could see the church doors standing open, onto blinding sunlight.

I smiled to myself. No one knew what I knew. It wasn’t important for other people.

I’m in an office. The sounds of typewriters fill our rooms.

“Yes, on my way out! Hallelujah.” I am thirty-seven years old.

After work, I walk home along the marsh, to watch the ducks. One of them waddles up to say hello.

I give it some bread from my pocket. The church is still standing; along the same route; abandoned. I stand at the door. The priest is there too, a ghost, moving between the pews, muttering.

In my mind, I call out to him, and he turns, looking at me with his dead eyes. They looked like that when he was alive, too.

He smiles and I shut the church doors. But one hangs on a hinge, and I can feel the priest coming closer, through the wood. I stand there and wait, as I used to do as a boy, for him to approach.

He stands on the other side of the wood.

He wants something; me probably. But he doesn’t speak.

Only a low moaning. I go back to my apartment, put on my headphones, strap the rubber around my elbow and apply the needle to my arm.

Inside, the world awaits my feet.

I was a recipient of thirty-two thousand dollars as part of a class action lawsuit against the Church, when I was thirty-three. I still have the money; I haven’t spent it.

I hardly told anyone, even when I had to leave work to testify.

But that doesn’t matter. Nothing matters until I can figure out the other . . .

I’m cursed. That’s what it is. And it’s okay, to be cursed. Like an old friend, who won’t leave. Who moves in with you, against your will, and then dies. And then still doesn’t leave.

I allow myself one grain of heroin a week. The money I am saving. I could move to Florida. Madagascar. I could kill a priest.

No, I forgive them. I forgave them then, too. What do they have to do with me? They don’t know anything.

None of them do. They don’t know what ghosts are. There is no afterlife; it’s this life. They’re right here; but I don’t know where they come from.

It’s the weekend and I make coffee. Susanne has been coming around more often lately; I don’t really know why. We don’t even sleep together. But she keeps coming by. I let her sleep on the couch. She doesn’t seem to mind. It’s like we’re married, but I’ve never been married. Probably it’s not like that. It’s not like anything.

“What are you doing today?” she says.

“Come with me to the park.”

She works for an old woman who lives by the library; she reads books to her, and cooks. She’s my age but she looks older. She was born in France. I think she’s crazy. (That’s why I like her).

We sit on the bench. I don’t see any birds. It’s hot. Susanne sighs.

I cook her supper. We watch television. She kisses me on the cheek and leaves; back to her house.

My telephone is ringing.

“Would you come by?”

“We need your help.”

Father Hughes is old. But he has a youthful smile. The new church is not as pretty as the old one. But then, this one is technically not a church. Even though it’s still occupied by priests. They call it a recovery clinic. It’s a sort of prison, really. They’re all fitted with tags.

“Martin.” He embraces me, and I let him.

He points up at the ceiling. The fluorescent light is flickering.

“I can take care of that for you. Do you have a tube?”

He points to the corner.

“Take me five minutes. Hold the ladder, will you?”

The light makes its light noises, blinking on and off, talking to itself.

I take hold of the tube, and rotate it, to get it out of the housing.

The thing about cylinders is they have a very precise geometry. It’s the same shape science fiction writers have suggested we could travel to the stars inside of. You get a lot of area, and pressure is spread out over the surface. Its curve is like stars too: curves are strong.

I make to toss the thing down to him and he grins a fake laugh. I go down the ladder and get the replacement.

“See anything up there?” Father Hughes asks.

“I think the wiring is shot; it’s frying these bad boys too fast. You should call the council.”

“Don’t want to deal with them. You fix it, Martin.”

I put the new cylinder in and it blinks to life. I see Mirabelle’s face inside of the tube. She’s moving down the hallway. Like she’s dead. Well, she is dead. Like she’s going towards the light of heaven.

She turns to look at me, inside the glass. Her eyes are dead too, like Father Hughes. I look away, and descend the ladder.

“Martin, take me for a walk, won’t you? Just around the grounds. I’m allowed to go when I’m with someone.”

I step outside with him and we go around the church—well, the compound. The gardens are happy. Priests seem to understand gardens.

Mirabelle was wearing blue. She always liked that color.

“Do you remember Mirabelle, Father?”

“Of course. Such a sweet girl. Things were different then. A smart girl like that could go far. I don’t know about now.”

“They still can, Father. Half the government is women now.”

“That’s what I mean. Caught up in the same game. No time for anything else!”

“Do you still have her blue dress?”

I’d seen it in his closet.

We go back inside the church—the compound—and go back into the vestibule.

“Really, it’s yours if you want it, Martin. She was your friend.”

“She was a very special girl,” he says, opening his wardrobe and handing me the small dress.

I slap him in the face and take the dress from his hands.

Behind the apartments I squirt it with lighter fluid and set it aflame.

Cylinders are also powerful musical instruments in the form of water glasses. The physics aren’t complicated; the finger vibrates the glass through friction, generating sounds waves.

But its eerie song for me has never been as easily explained. I think of it like the music of the spheres, which Shakespearean England believed was the sound the translunar stars made, in their perfect distance.

My friend Tom and I play the water glasses together and make recordings. I have over three hundred glasses of various shapes and sizes. We fill them with water, turn on the recorder, and play.

I wasn’t lying when I told my workmates I will retire soon. The government has seen fit to reward me with a house for my services. It’s like the sound waves: just a kind of deep listening.

Tom and I make love and afterwards I go down to the compound and stack the wood against the walls and set it afire.

I’ve decided to spend some of the money after all; I’m going to Madagascar. When I return, all can be settled.

On the plane, I hold the water glass music in my earphones, stringing me out over the thousands of miles over the water.

Maybe I’ll even give up the heroin. I should.

It was Tom threw the stone that time, when we were found out, through the top window, and they’d gone out to see who it was.

It didn’t matter then, of course. Or not to anyone but me.

Why did it take us so long to see? I still don’t really understand it.

But in a way I do: love is so mysterious. It covers a great deal, in its arms.

Susanne is moving in too, to the new house, along with Tom. I have started a garden; I think I am a priest that way.

Tonight is a full moon. We sit out around the fire.

“Hanged himself in the rectory.”

“Hanged himself in prison.”

He takes a piece of paper and out his pocket and hands it to me, folded into a square. I don’t open it, but toss it into the flames.

Fire was one of the four primary elements, for the ancients. I’m not sure we’ve come very far since then. Fire the purifier.

“Tom, if you were a Viking, would you have been buried at sea, on a burning boat?”

I put my arms around my people and we stare into the fire, waiting for permission to know all that we will need.

ROBIN WYATT DUNN writes and teaches in Los Angeles. He was born in Wyoming in 1979.