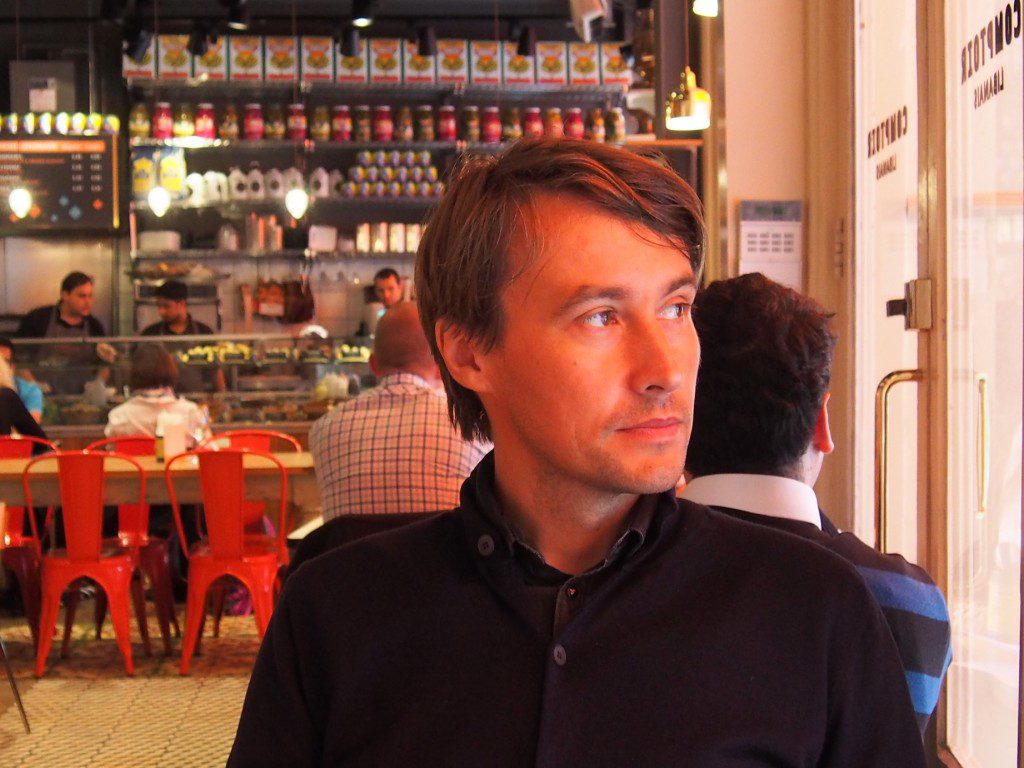 Bely browses the city newspaper’s website during breakfast. Nothing, nothing at all has changed. He hadn’t been in the city in sixteen years, but he couldn’t shake the feeling that he already knew all the news. Like the repertoire of some provincial theatre with largely predictable, only slightly varying dramatic plots, just performed by a new cast. But three articles grab his attention. The first one an account of a long-married retired couple who were acquitted by the Court of the Third Instance, the highest of the courts, after having been convicted of tax evasion while trafficking in waste candle tallow, which they scraped off of graves and sold on to chandlers. The two pensioners are now suing the state for severe emotional distress for a sum equalling 2,666 average Slovenian pensions. The second article is a horticultural ode to the city’s tidiness during the Nazi occupation, especially in the period before and during Hitler’s visit to the city in April, 1941. Maribor holds the dubious distinction of having been the southernmost point in the Third Reich.

The fact that the Führer held a public speech here is something that the citizens of Maribor, according to the writer, are still openly proud of, at least from the horticultural standpoint. Prior to the Führer’s arrival, the city was planted with hundreds of thousands of tea roses, pelargoniums, hortensias and even avenues-worth of sycamore trees. An exuberance of flowers which, during the later industrialized period, never bloomed again in such vast numbers, not even in honour of Marshall Tito, not for Yugoslavia. The city declined even further following the independence of Slovenia, when it became a dead zone, horticulturally speaking. With a good measure of nostalgia for the good old days, the writer concludes the article with a surprisingly daring thesis that draws on the philosophy of history: that human history is a continuous process of negative repetition, a circular regression, and not what the linear logic of technological advancement tries to impose on us. The third article in the Crime section mentions two outbreaks of unusually aggressive psychosis that led to an intervention by the relevant authorities and mental health professionals as well as the forcible commitment to the appropriate institution of the influential Maribor CEO Tine B. and the renowned professor and dean of the University of Maribor Ivan D. So far it has been impossible to determine whether there is a connection between the two cases. Both subjects were considered to be relatively stable personalities and their psychotic breaks occurred almost simultaneously, which is why the possibility of a reaction to an undetermined illicit substance cannot be excluded. The investigation is still underway, concludes the article.

Half an hour later, Bely exits the Hotel Eagle. Rosa exhales smoke and flicks her half-smoked cigarette into the snow. Absence of words. Dim light and the smell of petrol in a subterranean garage a few blocks off.

‘To the cemetery?’ Rosa asks dryly as they approach the garage exit.

Bely nods. Rosa heads east, towards the Maribor cemetery, then further south, toward the industrial zone.

Bely’s thoughts keep returning to yesterday’s dream. Could it have been brought on by exhaustion? Too much stale air from that cellar? Are dreams like a butterfly net that catches invisible images as they flutter around our collective consciousness? For all he knows that might have been a case of Rosa transferring her trauma to him through the medium of dreams. Why else would the cellar of a restaurant transform into the bar in Graz where Rosa first met the Hungarian a few months back? According to her, they had an affair the very same night. The next day she woke tied up in a cellar. They incarcerated her there for weeks on end, prevented from communicating with the outside world.

That dream has to be some form of communication, a message, not just a dream.

On the other side of the car windows flash giant shopping mall signs, a road perforated with potholes, industrial suburbs. Rosa’s gloved metal hand on the steering wheel. As if it were yesterday, Bely sees Rosa lying on the Balaton lake shore, tied to four stakes driven into the mud. He still feels sharp impressions of the knife handle in his palm, in the same place where Butcher bit into him. Silence, as the car comes to a halt. The chauffeur takes off his blindfold and leaves him in front of an unfamiliar villa by a lake. The door opens to a dim living room. Crackling embers in the fireplace. Some twenty masked people, cloaked in black habits. Latin plainsong. Following the ceremony and allocution by the sect leader, they hand him a small wooden chest carved on its side with a two-headed human body; a long, sharp knife inside it. When he pulls out the blade, he’s informed of his task for initiation into the cult of the Twins. The deep, coarse voice of the cult leader, who speaks perfect Oxbridge English. The masked members of the cult surround him and escort him onto the terrace. A stone’s throw from the terrace by the lake a fire crackles, a sacrificial offering beside it. He remembers the heat that flooded him beneath the weighty habit, heavy steps, and the bound body of a woman trying to escape, her eyes wide and frightened. The members of the sect on the terrace struck their staves rhythmically against a log. Cutting through the bonds, a strange feeling as he grabbed a hand made of metal instead of the soft hand of a woman. Running through the night. Reeds, tadpoles and frogs, silt, a lake-bed, mud clutching them by their feet. Barking dogs all around, hefty steps. Then shafts of light and drovers, shouting words in Hungarian and German. He remembers a dull blow to the back of his head and a slow dive through tepid darkness.

Why did they spare them? Why did the sect take such a risk? He was blindfolded during their ride back to the villa but, considering the size of the lake, he could easily retrace their steps back to the place where it all happened. Bely remembers waking up, something warm and slimy dripping on his face. He opened his eyes to a snout, a large fleshy tongue that licked his face. A grazing cow, and the two of them, heavily drugged. He, who betrayed their trust, and she, an inferior and sinful creature bearing only one soul, not two. The incomplete, that’s what the sect called the twins who, by extracting only half of the human fate from the uterus, were destined to serve those complete with a pair of souls.

ALEŠ ŠTEGER is a Slovene poet, writer, editor and literary critic belonging to a generation of writers that started to publish right after the fall of Yugoslavia. His first poetry collection Šahovnice ur (1995) sold out three weeks after publication and indicated a new generation of Slovenian artists and writers. Šteger’s books have been translated into 16 languages and his poems have appeared in internationally renowned magazines and newspapers such as The New Yorker, Die Zeit, Neue Zürcher Zeitung, TLS among many others. The English translation of his book of poetry The Book of Things (Knjiga reči) won both the Best Translated Book Award and the AATSEL.

URŠKA CHARNEY was educated as a Sinologist and Comparative Linguist. She is a Slovene translator, photographer, and graphic designer and has translated articles, poetry, and a novel, Zlati Dež (The Golden Shower) by Luka Novak, from Slovene into English.

NOAH CHARNEY is a professor of art history at American University of Rome and University of Ljubljana. He is also an award-winning writer for numerous publications, including The Guardian, The Atlantic, Salon, The Times and Esquire. He is the best-selling author of many books, including The Art Thief and The Art of Forgery. He lives in Slovenia, where he collaborates with local authors and publishers on books. He previously translated Yugoslavia, My Fatherland by Goran Vojnović for Istros Books.