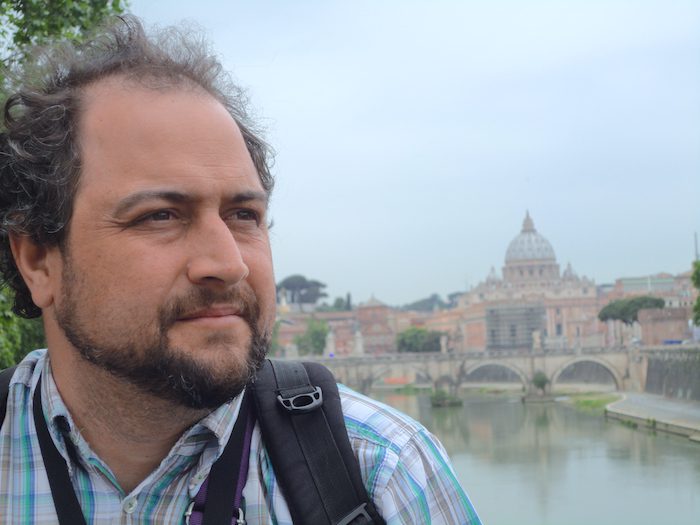 They were mesmerizing from the first moment, like seeing hoarfrost on a window backlit by sunlight. And like hoarfrost, their actions, or rather inaction, branched out across the city and fixed us in its crystalline serenity. That was before their example was broken apart, before everyone helped themselves to a piece and made it fit whatever took their fancy.

I saw them during their first week – not the first day exactly, but very soon after I’m sure. There were only five to begin with. I was carrying my box of stationery from what had only moments ago been my workplace and stood beside them at the bus stop without knowing who or what they were. The computer game company where I had worked as a ‘narrative consultant’ for eight years got a new algorithm to create the stories for games. I got a piece of cake, their sincerest best wishes and a box to pack my stuff in.

I asked the guy nearest to me if the 4:24 had gone by. He didn’t answer, so I asked again. When he didn’t respond a second time, I worked my way down the line to the woman beside him, another woman beside her and the couple at the end. They all remained like statues.

I don’t mean the busking variety. They just stood, indifferent, oblivious. A breeze tousled their hair and sent discarded wrappers and a plastic bag weaving through their legs. Not one of them flinched. The first guy kept his hands in his jacket pockets. The woman beside him locked hers behind her back. I can’t remember what the others did, but the guy and girl at the end were dressed the same: white v-neck t-shirt and blue jeans.

The bus arrived. I got on and the five remained at the stop. Some passengers waved and plenty snapped photos, but a few of us – just a few – exchanged glances. We got a sense, a subtle prick, of something fomenting.

Like me, those commuters must have hit Google up for answers once they were home. I tried variations on human statues, standing still and immobility until I found the forum. People dubbed them the Stillness.

Three days later someone posted footage of them at an ATM not far from my place. I should have been filling in job applications, but I grabbed my sweater and gave myself a stitch running there. There was already a small crowd which I joined. We all stood silently, the line between performers and spectators erased. Through the night a few more people came and joined, coming to watch but in the end becoming part of it.

Drivers and late-night pedestrians yelled abuse. Car horns blared, blasted and blurted. No one responded. Not a single comment leaked from anyone’s mouth. Not an eye rolled. We just stood. The night got quiet. We stood.

I’d like to tell you the city revealed itself in that moment, that its hidden nature emerged in subtle groans and cracks. To be honest, I was more focused on fighting fatigue and staying upright. The only memorable sensation was of myself gently swaying. At around daybreak, people started to move off and I followed.

Within days talkback radio classified the Stillness as a public nuisance, especially as more and more people started to imitate their behavior. The city was quickly dotted with copycat standings. Some of the more hysterical commentators condemned it as terrorism and social decay rolled into one. The Western World was literally being brought to a standstill. The work ethic which made our society great was being undermined. Though, as many pointed out, there was not much work to exercise that ethic on.

The regular news outlets found the narrative delicious. TV crews followed, picking up leads on social media. Every couple of minutes there was something to grab. To their credit the Stillness never broke their resolve, not when a microphone nor a smartphone was jammed in their faces. Yet, I shouldn’t be totally dismissive of the news. Its footage filled in the blanks, picked up what memory couldn’t hold. The jacket of the first guy was maroon with an arm badge peeling off. He had some old t-shirt underneath. The jeans were tight and black, the feet in canvas shoes. Dirty, scuffed canvas shoes.

The face of the woman beside him was nestled in thick ruddy brown hair. She wore a woolen shawl, black turtle-neck, black jeans and suede cowgirl boots. Her posture was stridently ordinary. The next woman wore a long skirt beneath her suit jacket and had black bobbed hair, her green eyes rimmed with eyeliner. Her stare was inexplicably solid, clearing a space around her.

The other two had crew cuts, a gold hoop earring in each left ear and the same combination of blue jeans and white t-shirt from when I saw them the first time. Originally, I thought they were a man and a woman. They could’ve been two guys, or two girls. If the stare of the bobbed-haired woman thrust outward, theirs shrunk away behind their eyes. I spent evenings, with a joint and red wine, watching and rewatching whatever footage there was on the forum or going out to join standings near me.

After the news networks, the police got in on the act. With radio and TV convinced the world was about to end, the cops had to be seen maintaining public order, even if it meant disrupting the calm of people doing absolutely nothing. They met no resistance, which only made the authorities look more ridiculous. They were glorified removal men, taking bodies from one place to another.

Law enforcement may not have been on our side, but the law was. We were not required to make statements and standing still was not a crime. Very soon the police returned us to where they found us. Hours later, of our own accord, we became active again and left.

The final standing I participated in took place outside a college football match. People gathered in the carpark with the tailgaters who couldn’t be bothered with the game. When they realized what was happening, they put down their beers, abandoned their smoldering grills and joined us. Word made it to the spectators inside, who came out first as a dribble then a surge to join the flow of others coming from around the city. It must have taken everyone’s resolve not to comment, not even gasp, when the players and refs appeared. I like to think that we were points on a citywide lattice, all connected, drawing strength and patience from each other.

Later that evening on the forum, people claimed to see the Stillness. Detractors argued that the Stillness had given up standing and so wouldn’t have been there. There were even stories that the Stillness were a hoax, a ploy by the TV stations to generate whatever news they could. These conspiracy theorists had forgotten the genuine disbelief of the reporters in the early days.

What no one mentioned was the moment when we disbanded – how we all broke our freeze at the same time – like we had come up for air at once or had woken from the same dream together.

The truth was the Stillness got lost in the noise of activity. Just as hoarfrost can’t last in the glare of the sun, the purity of the initial idea couldn’t withstand all the attention. People put their own spin on standing and it started to lose its meaning. For instance, extreme standing became a thing. People pushed each other to see who could go the longest. The record holder stood non-stop for five weeks. Because he lost so much weight, an astute entrepreneur tried to promote standing as a new weight-loss program. The overtly political borrowed standing as their tool too. T-shirts, stickers and badges were made, urging people to “Get Still” or “Just Stop”. One t-shirt had a pause button. Guerilla standers appeared in their bright orange uniforms, stenciled with two footprints, outside of government buildings or corporate headquarters. A church included marathon standing sessions as part of their worship.

Because standing was a silent activity, they had to confine their arguments to the forum. The savagery of the disputes more than made up for the peacefulness of the mass standings. Within a couple of months, the vitriol and acrimony reduced standing to a few die-hards. The media had found other news and the police had packed in being glorified removalists.

As the last fragments of the initial idea melted away, I spotted the Stillness again by chance. I was cycling through a desolate part of town which had once been a new business hub but now belonged to anyone who claimed it. The five of them, the original five, were lined up outside an abandoned office. No cameras, no police and no spectators. They looked exactly how I remembered them.

In a few seconds I was around a corner and on my way. People were talking about this thing called the Carnage and I wanted to catch my first riot.

RYAN SCOTT lives in the Czech Republic where he writes and translates. His translation of Jiří Kolář’s poems recently appeared in B O D Y. His prose and poetry work has appeared in Fail Better, Overland and Otoliths, among other journals and websites.