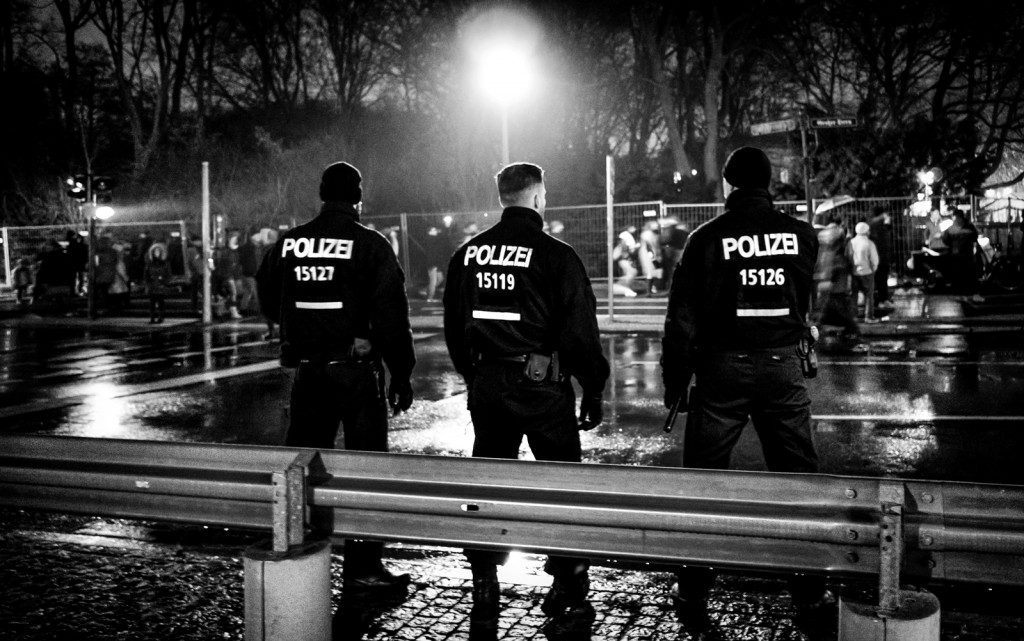 The best time to catch a bus is about 10 minutes before it departs. A slightly nervous traveler, I arrived at Alexanderplatz much too early. The bus won’t even arrive for another hour. Maybe I’m a little more anxious than usual because I’m on my way to a Pegida demonstration in Dresden to see if I can catch some interviews with people who have recently joined the far-right anti-immigration movement (Pegida is an acronym for Patriotische Europäer gegen die Islamisierung des Abendlands, or Patriotic Europeans against the Islamization of the West). Alex (as Alexanderplatz is affectionately known in Berlin), usually so busy with foot traffic and busking, seems deserted at 9 a.m. The rows of wooden stalls are just starting to open; you can smell Würste grilling and hear Kartoffeln frying; leather goods are being laid out and hung up alongside growing displays of Berliner knick-knacks. Too early for anyone to sit leisurely at a wooden table in the kitsched-out Biergarten, with its windmill and Drindl-wearing “Fräulein”… The Platz–usually teeming with tourists, people living in the street, shoppers, commuters (this is one of the city’s major metro hubs), partyers on the prowl, aimless wanderers, and the disturbingly focused mentally ill–is subdued in the early morning. Too early, too, for the street performers that will later add to the atmosphere of carnival and retail.

Two people catch my eye, a man and a woman talking in the middle of the Platz–not so unusual, of course; but I’m suddenly awake to something anomalous and out of the ordinary about them. The woman, in her thirties, is slender, and dressed professional hip in a black leather jacket, black scarf and black pants that flare widely from mid-calf to heel; she carries a small briefcase-like shoulder bag tucked under her arm. I can hear faintly through the distance that they’re speaking English, but for both of them it’s a foreign language. Her hands are gesticulating in short intense articulations in concert with her voice. The man, a little shorter than she, is listening patiently, and where there’s an opportunity, quietly interjecting. He’s calm and relaxed in his posture, respectful, receptive, assured. Although the only black person within sight in any direction, his easiness establishes his place in the Platz. But I can see his Air Jordans are starting to break down, his leather jacket has several scars of white paint on its back as if he had accidentally leaned on a fresh-painted fence somewhere; his black & white checked scarf is wound with a chic looseness. I can tell he’s been living in his clothes for a while; the stonewashed jeans are beginning to stiffen from soil and prolonged wear, creased at the knees like an accordion. I take him to be a refugee from North Africa; there are thousands in Berlin now, working out their individual desperate fates. But the interaction between the two of them is not taking the shape of a typical down-and-out solicitation for help. Even at this distance, one senses an intimacy between them. She is trying to make him understand something he clearly already understands. The way he hovers beside her, slightly in front of her, refusing to be dismissed, suggests the persistence of an established relationship. But for his dress, they could be mistaken for lovers in a kind of quiet public quarrel. She is not pushing him off as an unwanted; and his posture is confident, respectful, attentive, not abject. He is not folded into himself with the solitude of a marginalized loner. He stands as one cognizant of his role at the center of a human drama. She concludes, and turns from him, but somehow not away from him, and continues walking. He moves with her, says a few words; she responds. They are walking together, talking. But there is a sustained intensity and pointedness to her expressions. She stops and turns to him at the door to the public facilities on the Platz. He steps a little closer. She speaks with him insistently for a few minutes more. He responds calmly. She puts up her hand, palm out, turns and descends the stairs. He’s been rebuffed. He turns from where she stood and walks back into the center of the Platz, approaching another woman passing by. Excuse me, he says in English, looking for an opening; she walks past, picking up her pace, pointedly ignoring him. He angles off in another direction, repeats the manoeuver, and is again rebuffed. He is working the Platz. The first woman, in the end, not having offered what he wants or needs, he is searching for a better opportunity, a more yielding target. But now here’s the first woman again, she has exited the facilities into which she had disappeared. She walks over and begins talking to him, picking up where they had left off. They are re-engaged, as if she had told him to wait there in the Platz for her to return. They walk off, side by side, her hands again articulating volubly. Following from a distance, I can see that he is listening intently, again occasionally gently interjecting. They are having a serious conversation as they approach the Alex S-bahn station. In front of the escalator to the platform, she turns to him. She could lean forward only inches to kiss him good-bye, they are that close. Again her voice rises with an agitation reined in by the loose decorum of being in public. Okay, he says, okay. She turns, steps, and the escalator carries her up. He has turned a second time from where she left him, back into the Platz, his gait easy, without intention, drifting with the little currents of motion in the gathering human sea of Alex. He approaches a woman perched on her heels, balancing on a low-walled garden box and eating a big meat sandwich. Excuse me, he says. She shakes her head and he keeps moving without breaking his stride. And yet he appears not to be heading anywhere. He is on the make, meandering in the multi-directional foot traffic of the Platz. But the enigma of his 20-minute engagement with the first woman lingers, a private drama played out in the public square. What did she need him to understand, this man from another country, from another continent, so far from home, trying to survive on the street by his wits. Whatever it was, it was genuine; and for that short time, even as, ultimately, a rejection in progress, the two of them existed together one step from the border between meaningful connection and the economy of the lost. He turns a corner and I let him disappear.

Read more excerpts from the Berlin Notebook at the LARB blog
Read the entire Berlin Notebook, out now from the Los Angeles Review of Books
Read Joshua Weiner’s essay on the Berliner Ensemble’s production of Bertolt Brecht’s Mother Courage and Her Children at Tikkun.