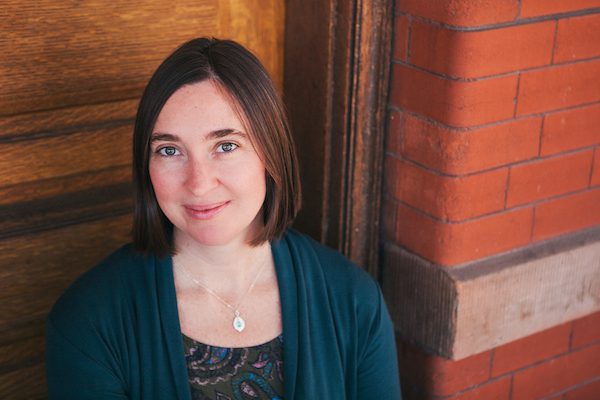 Kali descended and asked me
to describe her in in three words.
I said goddess of destruction.

She said goddess of time and
change. I said that’s five words.
She said I can’t be contained.

to begin. Let’s begin with it is morning
and I am standing on the sidewalk
at the center of a thousand colors,

a thousand textures: silk and brittle,
petal and spike, wrapping paper,
burst balloons blown over from a party

the wind ended, the tree’s shed leaves,
dog shit, flowers and leaves, a spectrum
of greens. Or, three things happened:

My grandfather died. My best friend
had an abortion. The state of Oklahoma
executed Clayton Lockett.

Or, at the coffee shop where I am writing,
the silverware clatters to the floor,
and the toddler who has climbed back

into the chair she just fell out of
falls out again. Or rather, the chair
topples over, not once but twice,

then a third time, and the girl cries
all three times, and her nanny puts her
in her stroller and they leave.

The manager asks me if I saw
what happened. That chair is slippery,
I say, or maybe it’s the floor.

Some things seem bound to
keep happening over and over as
the rest of us watch, astonished.

Or we can begin with before the abortion,
when they made my friend google seven
weeks pregnant and look at the photos,

the hands and feet paddles, the heart
a center darkness. My grandfather died.
Clayton Lockett died. Or we can begin

with an ending: how else should
summer end but in regret? What was I
expecting? I’ll tell you: I wasn’t expecting

to find a dead bee in a zinnia.
I wasn’t expecting snow in September.
What am I even talking about?

Let’s make a list. Wars, of course.
Count the wars: one, two, three,
four. And disease: ebola. Enterovirus D68.
Whooping cough. What else. Airstrikes,
or not. Peace protests, or not. Coal ash.
Radiation in the drinking water. The woman
in Liberia whose whole family died,
and now her village shuns her because—
but I already said ebola. The woman
who was held hostage for 11 years,
kept in a cage, who bore and cradled
the child of her captor. The woman
who, the woman who. Wars. The daughter
of the woman whose boyfriend beat her
to death signs up for a writing class
about grief. My daughter gets a cough
and a bee sting. I call the 24-hour Walgreen’s.
The wars are far away. The man with the sign
that says Vietnam Vet, anything helps
is always on the corner of 6th and Colorado.
I turn down the music when I pass
and hand him packs of trail mix, or
I’m out so I wave and don’t turn down
the music, or I don’t wave and try not to look.
I have said all this before. The pharmacist
says 5-year-olds can take Benydryl.
What a miracle the 24-hour Walgreens is.
I would lie down on the floor
in thanks but I have to make breakfast.

Or we can begin in a dream in which
I am explaining to an audience
the concept of the karmic circle:

my actions affect your actions. It’s a snake
swallowing its tail. It’s a ring of flame,
that old symbol. Or I am saying

in a voicemail to my friend the way
the sun is filling the trees this morning
is a trick. We have to steel ourselves

against it. Dead bee in a zinnia,
the zinnia browning but still pink,
the bee a frozen model of itself.

And I thought I was finished with mourning.

I am asking the audience
how many of us paused
over coffee, imagining it?

The prisoner led from
his cell to his death
in the name of all of us.

After the execution,
I stopped listening to
the news. It was a great excuse

since I don’t like the news.
The audience is raising its
collective hand and saying but:

he was a murderer. But I’m
not talking about innocence.
There are a thousand ways

to talk about what happened.
Let’s talk about rattling
the bars. When an inmate is led

from the cell block to the execution chamber,
the other inmates might rattle the bars.
Rattle the bars with what?

I don’t know.
Hard back books? Spoons?
Their bare hands?

Whatever will make noise.

On the sidewalk I talk
to Kali: Kali when she
swallowed the pill that
would end the baby’s
life, Kali when he steeled
his face against death
Kali when I bought
the flight to the funeral
Kali when they pulled
the curtains closed
Kali when she couldn’t
bury the body Kali when
we stood at the grave
and couldn’t cry: really?
All this will happen again?

We might begin with three seasons,
three deaths, none of them mine.
After my grandfather died his mouth

hung open as if he was astonished
at his own absence. After the execution,
I stopped listening to the news.

Instead now, in the mornings, I walk
around the block. Kali, I have prayed
for you to make me an orphan. Kali

I have begged you to leave me alone.
Kali because of you the sidewalk is scattered
with ribbon and petals and glass.

KIMBERLY O’CONNOR is a North Carolina native who lives in Denver, where she is the Young Writers Program Director for Lighthouse Writers Workshop. She received an MFA from the University of Maryland in 2009. Her poetry and creative nonfiction have appeared in Copper Nickel, Colorado Review, Hayden’s Ferry Review, Inch, Mid-American Review, Passages North, storySouth, Tar River Poetry, THRUSH Poetry Journal, and elsewhere.