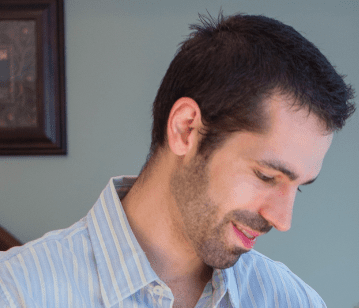 The police officers were great conversationalists. They nearly erased the awkwardness of talking from the back of a cop car with a metal screen separating them. How Eric and Jessica came to be there was a long story, but basically, they needed a ride and the cops were very insistent. Once they learned that Eric and Jessica had recently moved from rural Missouri and didn’t know anyone to call from a payphone, there was no refusing the officers. They’d just finished their shift, the apartment was on the way to the station, a cab would cost a fortune, a tow truck might take a couple of hours, their car wasn’t obstructing traffic, it was no trouble. They insisted.

They asked how long they’d been married. They asked Eric about his job, which was a short conversation since he didn’t have one yet. Then they asked Jessica a hundred questions about her government job, everything from her opinion of Reagan to her expected start date.

The conversation paused briefly as Officer Reynolds took an exit Eric didn’t recognize from either the drive to the mall or his study of the road atlas.

“Did you take the wrong exit?” Officer Carter asked.

Carter’s tone suggested that his question wasn’t a question. “You sure?”

A beat passed before Reynolds and Carter began sermonizing on the area’s museums, monuments, restaurants, happy hours, malls, day-trips, neighborhoods, highways, and traffic, traffic, traffic. Eric tried to listen and learn about his new home, but it was difficult while brooding about someone else coming to their rescue. He felt disappointed with himself for not taking care of things, of Jessica, frustrated that someone else played the hero, and frustrated for being frustrated.

He mostly lost himself in the passing scenery, or else he might not have noticed that nothing looked familiar; they should have been nearing their apartment by then. “Hey,” he interrupted, “we’re still learning the area. How close is our apartment?”

Carter smiled at Reynolds like they shared a secret. Reynolds didn’t acknowledge him. Carter’s gaze lingered. Reynolds glanced over, shrugged, tilted his head. Carter turned, half-smiling, and said, “About five or six miles behind us.”

Eric’s stomach dropped. “Why are we going this way? Does it circle back to our apartment?”

They continued chatting up Jessica. The road snaked forward, the houses became fewer, the trees grew thicker. Eric felt an invisible weight on his chest. He flapped his shirt to cool himself.

“So is this way faster because of traffic?” he asked, hoping, pleading.

Jessica looked at him, confused.

“Let us out now. We’ll report this, you’ll be lucky to keep your badges.”

Carter laughed. “If you report anything, you’ll be paranormal.”

“Everything will be okay, Jess.” Carter cackled as he slouched into his seat, and Reynolds puffed out laughter.

“I promise nothing bad will happen.” The officers laughed even louder.

“It’ll be okay,” Eric said, squeezing her hand. He tried the door handle, knowing it wouldn’t open. He pulled it and slammed his shoulder into the door. Nothing.

He lay on his back, head in her lap, and cocked his knees up to his chest. His feet exploded against the door’s reinforced window. It didn’t budge. He re-cocked.

The cruiser stopped roughly, throwing Eric into the floor. He heard doors opening. The car’s dome flooded the backseat. He looked up and through the open door into the eye of Carter’s revolver.

“Yeah,” Reynolds added from behind the wheel. “Knock yourself out. I’ll taze your wife while you watch with his gun stuck in your mouth. But? Do what we say? It won’t be too bad.”

Everything felt very quiet and still after Carter returned to his seat and Reynolds drove on. Silence rang in Eric and Jessica’s ears, somehow undisturbed by the cruiser’s tires rolling on the asphalt or the heartbeats and breaths pounding through their chests, throats, and mouths.

They hadn’t reacted to his attempt to kick out the window. They’d anticipated it. Planned on it. Their roles, even their lines, had been scripted. They’d done this plenty of times before.

The cruiser turned. Eric read a brown sign with engraved yellow letters: Lake Accotink Park and Nature Preserve, Closed Sunset to Sunrise. It was dark outside except for the lineless pavement and low tree branches illuminated in the cruiser’s headlights. Jessica cringed into Eric’s arms, crying quietly. He sucked in mouthfuls of air as quickly as he spat them out.

Several minutes later, Reynolds turned into an empty parking lot. It was cracked, dirty, and dotted with weeds. Woods bordered its front and one of its sides. On the other side, Eric could just make out an embankment holding back Lake Accotink. Reynolds drove to the angle of the L-shaped woods. The headlights revealed a small nook that wasn’t visible from the road. He edged the car into it and killed the engine and lights. Jessica was convulsing with each small sob and trembling in between. Eric felt his heartbeat in his shoulder.

Reynolds stood beside Jessica’s door, hands on his hips. The window muffled his raised voice. “Remember what I said earlier.”

Outside Eric’s door, Carter added, “Just follow instructions. It’ll go easier on you both. Step out slowly. Turn slowly. Put your hands on the trunk.”

He opened the door, and Eric did as he was told. Carter grabbed his right wrist and yanked it backward, slapping on the first of the handcuffs.

Eric pushed off the trunk with his free hand and landed a hard left into Carter’s cheek. He drew back again, unconsciously sneering and baring his teeth. But the surprise of the blow pushed Carter to his ass, and his body’s momentum splayed him on the ground.

Eric ducked low and sprinted for the woods, leaving Jessica inside the cruiser, alone. She shrieked his name. He didn’t look back.

Reynolds ran after him, slicing the darkness with his Maglite. Carter grabbed Jessica around the waist two steps out of the cruiser and threw her back inside, shutting the door, re-trapping her between the seat cushions, doors, and metal screen. He pulled his flashlight and went into the woods.

Jess watched him go and then sank into the seat and held herself. She stared out the window, back toward the road. She stared at the woods. She sniffed a few times, pulled her knees to her chest, and stared at the ceiling. She closed her eyes.

Thinking back to when Eric vented his frustration about the car by snapping at her, remembering all the similar incidents they’d shared, she wondered how she had ever thought she could depend on him. But she wasn’t shocked, or angry, or upset, or scared. Nothing mattered now.

What felt like an hour or two passed, and she fell asleep.

She woke when the driver’s door opened and someone said, “Shit, they took the keys.” When she looked up, Eric smiled at her.

Before she could think, he was pulling her behind him as they jogged away from the cruiser. She noticed he was limping but couldn’t muster the strength to ask why. He glanced back and hissed, “Come on, baby!” He pulled on her arm.

There was shouting behind them, near the cruiser. A handful of asphalt shards sprayed against Jessica’s legs, followed closely by a loud crack and receding boom.

Then she was in his arms. He ran into the woods, favoring his hurt leg. Thin branches lashed their cheeks, necks, and arms.

Chunks of tree bark spiraled down in front of them. Bits of burning wood showered their heads and shoulders. A giant in the sky applauded, each crack merging with a shuddering echo. The smells of burnt wood and gunpowder battled the forest’s damp odor.

Eric ran on, Jessica safely in his arms, holding onto his neck, ducking her head against his chest, serene, loved, safe. For a moment, somehow, everything was perfect.