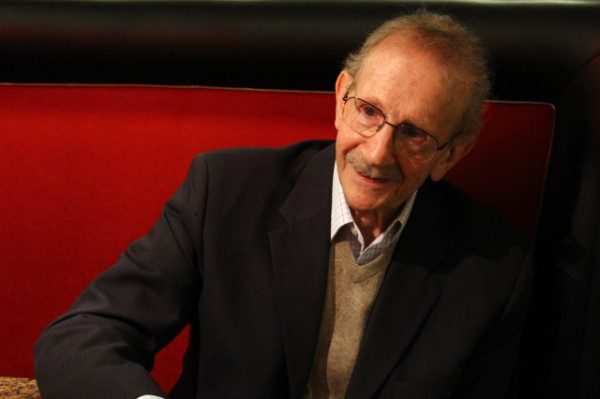 IT’S NOT A POEM

Phil Levine died on Saturday. While the newspaper obituaries discussed his position as a “poet of the common man,” the tributes from those who knew him personally seemed most often to comment on how his teaching changed their lives.

I was never Levine’s student, but I was lucky enough to have him critique some of my poetry when he visited my college. I was psyched and nervous when I found out I’d have a conference with him; I knew and loved Levine’s poetry, but, since I was also a kid from a blue collar family and a city of industrial decline… I don’t know, there was some fantasy of affinity. I really, really wanted him to like my work.

He didn’t, but, in that thirty minute conference at a grungy cafeteria table downwind from Pizza Hut Express, he lodged a splinter in my writing mind that has never come out.

Among the poems he critiqued was one that had had a surprisingly good workshop reception. In fact, it was probably the first time in five years of workshops that a poem of mine had survived largely intact. I had that student combination of exuberance and fear: “this is my best poem EVER!!! Will I be able to write a better one?” Fortunately, that bar was not as high as I thought.

Levine put the poem on the table. “This is really very clever,” he said. “At first I thought, okay, starts strong, but it’s a long poem. The kid can’t keep it up. But you did. Every line has energy. I got to the end, and I thought, the kid did it. It’s very witty.”

I’m going to do a real disservice here to the depth and erudition of his comments, but I honestly don’t remember the details. I do remember that what he said felt correct. What I had written was smart and clever, but used those qualities as a way to charm the reader, and therefore avoid saying anything of substance. Sure, it hinted at substance — but the poem was defensive, emotionally allusive and elusive but not impactful.

Yes, perhaps Levine’s take shines a light on his own poetic style: narrative, blunt. To some readers, prosaic. One could argue his critique just showed an aesthetic dislike for a certain kind of poem — the “elliptical” poetry common to people who went to college or grad school in the ‘90s. That’s a valid discussion, but not one I personally feel like having because here I am, twenty years later, and, like most writers, I’ve read and been told a bunch of stuff, and there are maybe ten comments that have stuck with me in an essential way. “It’s clever, but it’s not a poem” is one of them.

Maybe it sticks in my mind because it reflects an anxiety; maybe this question isn’t a criterion so much as it is a fear to be dealt with. Maybe it’s simply a request to be aware of my writing tendencies. Or maybe it’s true. I tend to think so, because if I replay Levine’s voice in my head, if I ask of a poem “is it just clever?” I do not want the answer to be Yes.

BRADLEY PAUL‘s work has appeared in American Poetry Review, ActionYes, Smartish Pace, and other journals. His second book of poetry, The Animals All Are Gathering, was selected by Jean Valentine for the AWP Donald Hall Prize in Poetry, and was published in 2010 by University of Pittsburgh Press. He lives in Los Angeles.