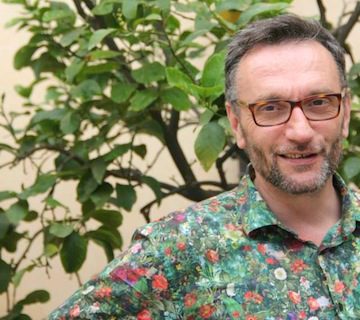 Our discussions regarding the proper disposal of body parts being now concluded
I would like to confirm the following:

EVERYTHING YOU FEAR WE’LL CALL YOU

everything you fear we’ll call you

I pretend to have holes in my palms that I can pass the opposing thumb clean through like pushing madeleine biscuits into nothing. This fantasy of the frontal lobe opens a new portal to strange finger placements and other ways of greeting people. I am liberated. Why did no-one think of this before?

— The man they nailed to a tree 2000 years ago, my priest says to me, more slowly than he usually speaks over the phone, which is hard for me to hold.

— I’m not the type to see crosses everywhere, I reply, this is pretend body modification for self-amusement, a heavy piercing straight through each palm.

— No sacrifice? he asks.

— No sacrifice, no yearning, no prophecy, no allegory, no ever-lasting symbolism, these holes are exclusive to the present tense.

— No, father, because the frontal lobe says the point is to be sinless and sinning, no agency, no regency, no word but words, nothing in stone, just two thumbs pushing through holes in my palms.

DANIEL ROY CONNELLY is a theatre director and English and theatre professor at John Cabot University and The American University of Rome. His recent poetry has been widely published by, among others, Magma, Acumen, Ariadne’s Thread, The Alarmist and Nutshell. His essay on directing western theatre in China appears in the current edition of The Istanbul Review. In February 2014 his production of Ibsen’s Hedda Gabler premiered at The English Theatre of Rome, where his one-man show, Caffe Macchiato, will open in September 2014. He has recently been named first-prize winner in the 2014 Fermoy International Poetry Festival.