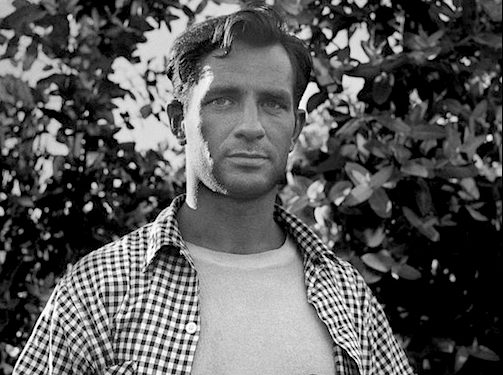 
I first encountered Jack Kerouac’s 11th Chorus of Desolation Blues while sitting on the floor of a Barnes and Noble in the suburbs of Detroit. I was 16. At this point in my education, appreciating poetry meant aggressively underlining alliteration and circling any appearance of figurative language. I was a high-strung little perfectionist, so naturally I appreciated poetry better than anyone else in my class, and this I did by underlining alliteration and circling figurative language better than anyone else in my class. We read Marvell, Blake, Dickinson, Donne. In the biology lab, a fly might have been too small to dissect, but in English class, nothing was too minute to be taken apart and labeled: simile! iambic pentameter! feminine caesura! personification!

The 11th Chorus has little of the poetic anatomy we’d been taught gave a poem its strength and structure. For the most part, it employs simple declarative sentences (“I have been empowered to lay my hand on your shoulder and remind you that you are utterly free”) and short, plain words that were too ordinary to be included in my SAT vocab flashcard pack. The poem is unrhymed and, while it has a powerful rhythm (it was intended to resemble a jazz chorus, after all) anchored in its repetition of don’t have tos (“You dont have to be famous, / dont have to be perfect, / Dont have to work, / dont have to marry, / Dont have to carry burdens”), simultaneously forceful and soothing, it’s not one that lent itself to the kind of silent mark-up of trochees and apogees to which I was accustomed.

Freed of my compulsive student ticks, I actually read the poem. It helped that much of it’s written as an imperative. It’s a funny sort of prescription, a lecture that tells you that you don’t have to listen to anybody’s lectures: Listen to me, but don’t. You decide. Swap the 11th Chorus for On the Road and you have the salvation story of every overwrought teen of the last five decades, but that doesn’t change the fact that it was a revelation. I wrote the poem on a t-shirt in ballpoint pen and let the shirt grow yellow in the armpits before I finally threw it out ten years later. In the meantime, I moved to California, moved to New Zealand, became a poet, and lived as a near feral tent-dweller for a number of years.

When I finally threw out the t-shirt, I was someone else, someone who didn’t need it anymore. But I read it again, with the eyes of a person who no longer needed to be told that I was free to make my own choices.

By that point, I understood the hyperbole. I knew that I did, in fact, have to work, knew that the “Hozomeen” referenced later in the poem (which I’d originally taken for a nonsense word) was a mountain near where Kerouac had spent a summer working as a fire-spotter for the National Forest Service. But I knew also that work could mean any number of things, and it was best when I could choose what. And I knew that it was better than no work at all, because I’d done no work for a time, and that got boring. I didn’t need to be perfect anymore, but I did need to be making something.

Rereading the poem now, several years on from the loss of that wearable sweat-sponge, I notice one other thing I missed as a teenager: the first few lines. At 16, “And if you don’t like the tone / of my poems / You can go jump in the lake” was entirely figurative, “the tone of my poems” a metonym for “me,” with a adolescent translation of, roughly, “If I’m not good enough for you, then fuck off.” But now I read those lines at face value and see that value, too.

If the obvious effect of the 11th Chorus was to nudge me onto a freer life path, one that included rebellion, travel, and a few years of sloppily conceived imitation Beat poetry, the more subtle effect was to plant a seed of defiance against the tyranny of approved tone.

Consider this example: my friend and old college roommate, Paul Legault, is a successful poet with two critically hailed books and an appointment as writer in residence at WashU. A few years back, he published a collection of cheeky English-to-English translations of Emily Dickinson’s poetry. It was brilliant and weird and very funny. But shortly after the book came out, he got an email from a former mentor who was angry about what he’d done, as though it was an affront to poetry itself, not to mention a demeaning of his poetic gifts. Her complaint, I believe, was not simply about subject matter (the sacrosanct Emily), but also about tone.

The industry standards regarding tone are not that dissimilar to those my high school English teachers used to select those canonical works we picked apart. Poetry is serious business. We avoid alluding to pop culture, and we never do so favorably, unless we are being ironic. We are ironic but not sarcastic. We are excited but restrained. We belong to no century. We do not write sly English sonnets about sputum. We do not recast Emily Dickinson as an over-sexed zombie aficionado. These are gimmicks, and our enthusiasm for them makes us impure.

Some of these standards for poetic tone have passed away or are no longer enforced. But I fear that we’ve simply replaced them with new ones. Now, we must all be ironic. We must all engage pop culture with ambivalence. We must all provide detached social commentary on topics that are either internationally significant or trendy in Brooklyn. Etc. It doesn’t matter what the rules are. The point is that, no matter the era, poetry’s gatekeepers seem to be particularly precious about tone, more so, I would argue, than any other aspect of poetry.

Fortunately, no matter the era, we also have poems like the 11th Chorus that prompt us to challenge these conventions. To the general public, Kerouac and the other Beat writers are cultural icons associated with freedom and rebellion, and I think even writers sometimes get caught up in the mythos and forget the Beats’ literary contributions, not least of which was a pushback against the limitations of acceptable tone and form. To me, the 11th Chorus encapsulates that contribution. While it may have been overlooked for inclusion in my high school English syllabi, it does exactly what my teachers promised good poetry could do, using tone and form to support and mirror its message: It’s okay to do it your way.

HOLLY PAINTER is an MFA graduate of the University of Canterbury in Christchurch, New Zealand. Her poetry has been published in literary journals in the US, New Zealand and Australia. Her most recent collection is Awkwords, a collection of sonnets about awkward words. Holly lives with her partner in Singapore, where she writes love poems on behalf of besotted people around the world right here.