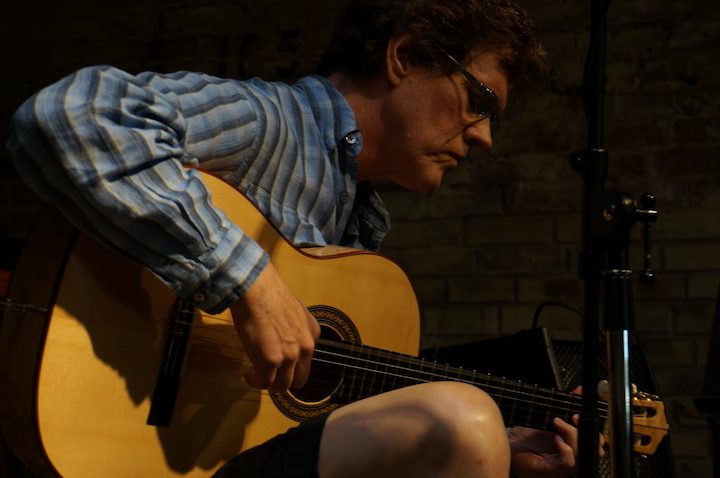 METAPHYSICS OF THE LITERAL HEART

Or this: the skin gives a little,
it breathes, it must, so that we might

not shatter. We allow room
for the motions that sustain us,

for the body ghosted by a will
we know so little about. Still

we choose. Still we know enough
to make our choices matter

and so revise them. I know a girl
who has a tattoo of the earth

between the wings of her scapulae.
They make of her an angel

of that world that flies a little,
needled into the literal blood below.

When she lies on her stomach,
eyes to her pillow, the planet flutters

into the night sky behind her.
The moon there fueled with sticks

gathered from the day before.
When she lies on her back,

she looks up through closed eyelids
at stars that have not been invented.

Earth falls to earth like a coin in a well.
Some nights the heart is that coin,

falling forever without a splash.
It is down there somewhere, the wish

you made like a chair or a theory.
Let us call it a thing. Let us be clear.

If there is an earth on your skin,
it breathes to exchange what it must,

holds in some measure of the freedom
to choose. It survives the way

the name of a river survives the river,
rusted with silt in the rainy season.
.
*

The skin boxes up the literal heart
like a gift. To live is to hide something,

to be specific and so a species, an earth
winged in the dark between the stars.

On a good day, the earth is breathing
with wells. But where it grips, it splits.

It breaks down like a widow at the knees.
(I know a girl with a planet on her back.)

And then the falling dust, so slow
it feels like stillness coming down.

(I know a girl who dreams of flying.)
Somewhere a movement in the rubble.

(Whose dream of flying says she cannot.)
Somewhere the cry of a distant siren.

Sure, there are worlds that hold to their surface,
so far as we know, that do not fracture.

There are dead planets that grieve no one,
whose nights clamp shut the desert sand.

They hang sharp in the air like jewels.
There are those who do not believe

in a buried life. They are aware of forms.
But there are no forms of awareness.

There cannot be. Planets come and go.
And yes, as we say, we are aware.

True. Some people buy a little time
with another man’s heart inside them.

They briefly die on the operating table.
They leave the room to the moment,

their body to the world. In time
their chests close to swallow the wafer.

And when they wake, they hear voices
in the hall, the beeps of the machinery.

And everything seems too strange
to be strange exactly. That comes later.

And they feel too alone with this to feel
alone. That comes later. Or not at all.

If I pinned a planet to my back,
it would be to honor where I came from,

to see it from a distance, small and thus entire,
like a sand dollar the night washed in.

It would be to hold that distance,
the way love for a girl would hold her image.

She who is no earth but of it, her mind
no body and nowhere without it.

Tempting, to simplify a world, our world,
to what we say about it. As if the thing

we held articulated just how we hold it.
One thing is certain: the mind is no body.

If it were, the say-so would be dead.
Without conflict, curiosity, faith.

Today I read of violence in the temple.
I nearly forgot where I was. And then

When a man dies, the others close his eyes.
They pull a cloth across his face.

They talk to him through the surfaces
of words. Each in his aloneness talks

to something. And then they bury him,
back to the earth, face to the absent stars.

I have a friend who believed in names
as bodies, in bodies as surfaces,

in surfaces as the limits of the world.
He died of drink from the insides out.

When I sat with him at the clinic,
waiting for the scope’s results, he shivered

like water. Why always dust to dust,
never water to water. Never the self he theorized

as no self, or the theory as disavowal
of theories. Only a watery assemblage

of surfaces, norms, rebellions, economies,
pleasures. Do not believe what you hear.

of a chair or stranger or harbor after dark.
They are practical in the way they make us

do the things we never think to do.
I too love them: the ache of the river

for the open sea. A world longs to hold
a world, and so be held, seen after, made new.

like an internet, or history, or God’s love
that spins the haloes of the particles.

So when it was time, when the doctor told my friend
what she could not see, how the damage

was such she could not feed the scope past
the scarring at the bottom, I thought, a man

like that knows a hunger I cannot fathom.
And between his hunger and him

a theory that went just so far, no farther.
He once told me he forgot two years

of his childhood, just a big blank,
no map, no edge, no form. For all we know,

it did not exist. Just a hole at the bottom
of the chamber where the waters flow.

And he was free, he thought, to look
at nothing. Or not look. What did it matter.

Let us bracket off those monsters
on old maps, the ones that tell us

something we cannot know. Let us
sail to the edge of the world

which we cannot see as such.
Who made this map anyway.

Let us sail to the brink of disaster
and sail no more, because the world

will not hold itself as a world
unless we come about. Let us drink.

Burn the margins of our experience.
Monsters, hell, I’ll show you monsters.

The mapping mind holds its compass
in its eye like a monocle. It holds us

in bounds, on course, or else we break.
Or is it the map that breaks.

To wake in the night frightens
a little light from the bottom of the ocean.

Ask that heart where it beats
the door of the visible world.

Is not the dream of the unified field
a bit of mind over the matters of experience.

One thing is certain: a body is not a body
alone, unless, perhaps, it’s dead.

Ask the circle if it is a closed
or open thing, a cup, a throat,

a mouth of darkness as we sleep.
This ocean grows heavy as we breathe it,

the way a lost memory of abuse
grows heavy in the arms of the abused.

I understand. How do we know
what we say until we say it.

See there, the insistence:
the implied giver, the strange receiver,

the strange new thing
no word has ever said.

Words see into words
the way a mother sees into a distant child.

She cannot create the one she names.
When he crowns, he wounds.

When he cries, her heart beats
a deeper path. And it goes on that way:

the howl, the worry, the waking
in the night. In her sleep,

gathering waves of blood that shatter
to be heard.

BRUCE BOND is the author of nine published books of poetry, most recently Choir of the Wells (Etruscan, 2013), The Visible (LSU, 2012), Peal (Etruscan, 2009), and Blind Rain (LSU, 2008). In addition he has three books forthcoming: The Other Sky (poems in collaboration with the painter Aron Wiesenfeld, intro by Stephen Dunn, Etruscan Press), For the Lost Cathedral (LSU Press) and Immanent Distance: Poetry and the Metaphysics of the Near at Hand (University of Michigan). Presently he is a Regents Professor of English at the University of North Texas and Poetry Editor for American Literary Review.