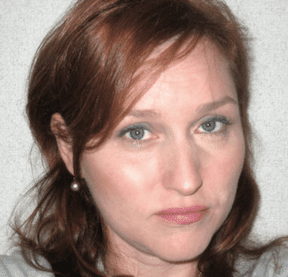 seeing? Some people, I’ve heard, at poetry readings
play a drinking game—taking a swig each time the word

‘body’ turns up in a poem. If they were reading this
they’d be drunk out of their minds by now—

too, they said, when my grandfather stopped
speaking the year after the accident, staring into space

and saying nothing. No one could get drunk on that,
on the sober silence we cocoon around my uncle’s absence.

Lost, like the Ten Tribes of Israel, like milk teeth—
ironically—as that’s the one thing my grandfather has left

of his beloved son’s body, of him: a small box of milk teeth,
each a tiny snow-slick mountain, faintly stained with blood.

JESSICA GOODFELLOW is the author of Mendeleev’s Mandala (Mayapple Press, forthcoming 2015) and The Insomniac’s Weather Report (Isobar Press, 2014), winner of the Three Candles Press First Book Prize. Her work has appeared in Best New Poets, Verse Daily, and NPR’s The Writer’s Almanac. She has also been a recipient of the Chad Walsh Poetry Prize from the Beloit Poetry Journal. She has a graduate degree from Caltech, and currently lives and works in Japan.