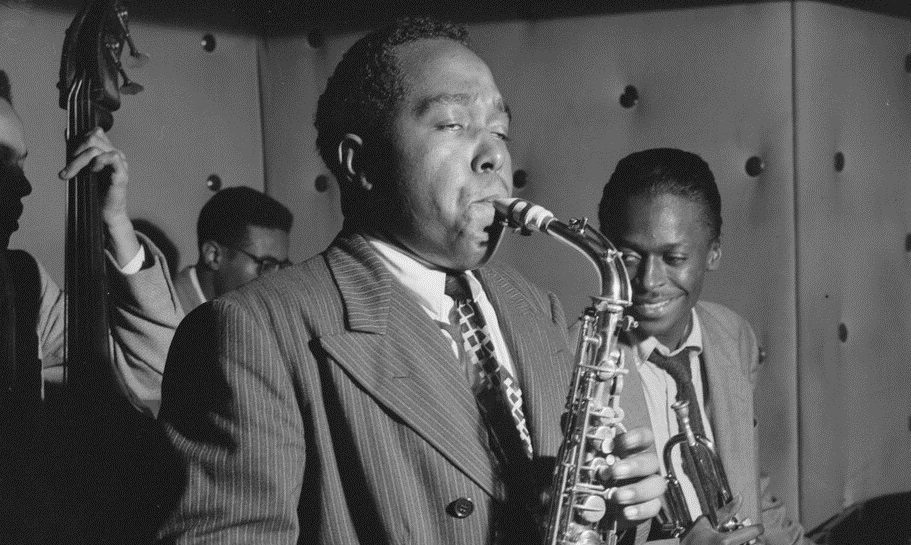 When Charlie Parker died at the age of 34 in 1955 — of pneumonia, an ulcer, a heart attack and advanced cirrhosis — the attending coroner estimated his body was between 50 and 60 years of age. Parker did everything early. The phenomenal saxophone player had been on the forefront of the jazz avant garde since he was a teenager, eventually pioneering the bebop movement with Dizzy Gillespie and influencing generations of musicians with his advanced conception of harmony, rhythm and phrasing.

In the days after his death, graffiti began appearing in American cities, traced into wet cement or chalked on walls. A simple message: Bird Lives.

There have been numerous biographies of Charlie Parker, who was also known as Bird, or Yardbird, in keeping with the jazz tradition of bestowing catchy monikers on its prized players. Stanley Crouch’s new book, Kansas City Lightning: The Rise and Times of Charlie Parker is the definitive word on Bird. To say that this biography is a “study” is misleading. This is total immersion.

Crouch, one of the most respected authorities on jazz and the African American experience, spent some thirty years researching this book, which only takes us to 1940, the time of Parker’s earliest recording. A second volume is in the works. The book is so steeped in jazz tradition and lore that it nearly feels like an autobiography. Crouch doesn’t merely depict Parker’s life, he brings us into it. Describing one of Parker’s earliest “cutting contests,” when an amateur musician would take the stage with an established band, hoping to gain approval, Crouch enlivens the nervous excitement with a knowing authority:

The instrument seemed heavier, the reed almost the size of a tongue depressor, the buttons on the keys slippery. He could feel his every breath, almost the flow of his blood, the indifferent presence of his nervous system. It was warmer on the bandstand, the lights and the shadows more intense. Everyone seemed to be staring at him, looking at no one else. What tune would they call? Would he know it? He knew he would know it. Would they give him any mercy? He didn’t need any mercy.

As it would happen, Parker did need mercy in this early encounter, which ended with him being laughed off the stage. It was one of the galvanizing moments that led the young saxophonist to the woodshed. Over the next several years he “put quite a bit of study into the horn,” he later said. “I used to put in at least…11 to 15 hours a day.” The result was the hatching of Bird.

Part of the allure of Parker’s life is that his brilliance was weighed down by chaos and tragedy, much of it self-inflicted. But not all. One of the most harrowing passages in the book concerns Parker’s first wife Rebecca, who lost their second child after a fall during pregnancy.

That emotion on her side turned to pain, and she began to wince as a large clot of blood made its way out with what was not a distorted baby but a string of flesh, not yet developed enough to be recognized as an unborn child. There was no time to think about that; within moments, the immobile string of flesh was followed by a gushing.

It is rare that a biographer’s knowledge of his subject is matched by such a vibrant facility with language. Crouch’s writing style is, as Miles Davis would say, “cleaner than a broke dick dog.” His knowledge of the African American experience and the roots of jazz and blues music put Parker’s accomplishments — his very evolution — into invaluable historic context. Crouch humanizes this jazz legend and brings to life the world in which he lived.

Crouch is not above the kind of word-slinging that adds humor and panache to his text, as in his description of the work of prostitutes in a Kansas City club. Here Crouch’s style and his knowledge of gutter nomenclature are infectious:

At the end of the room was the bandstand, and behind it a door that opened into a yard where prostitutes sat on benches in the summer, waiting to be called into action by a pair of code words: “walk one” meant there was a single john looking for action, while “walk two” signified that there was a duo ready to slump into what might be some polluted pudding.

The easeful knowledge of Crouch’s writing extends to his descriptions of Bird’s musical innovations. What at first might sound simply like blistering speed when listening to a Charlie Parker solo is actually an advanced conception of harmony. Where previous musicians soloed by playing notes included in each chord as it went past, Parker helped extend the possibilities of melodic improvisation, by incorporating notes both higher and lower than the chordal arpeggio. In this way he brought a contrapuntal approach to a monophonic instrument. All at incredible speeds. And spontaneously.

The bebop that Parker and Dizzy Gillespie pioneered would become a force, one of the first American cultural movements that had both artistic and pop culture content. Not only were countless musicians inspired to follow these musical pioneers, but many white and black Americans took up the beret, glasses and goatee favored by Gillespie. The bebop movement would bleed into the beat movement, mainly through the enthusiasms of Jack Kerouac, who wrote, in Mexico City Blues:

Charlie Parker looked like Buddha
Charlie Parker, who recently died
Laughing at a juggler on the TV
After weeks of strain and sickness,
Was called the Perfect Musician

It is hard to overestimate Charlie Parker’s influence on American culture. The poet Charles Olson, when asked about the poetic at Black Mountain College and in his circle of the post-war literary avant garde, said “Boy, there was no poetic. It was Charlie Parker. Literally, it was Charlie Parker.” Robert Creeley, too, was profoundly influenced by the saxophonist’s innovative phrasing and timing. Not bad for a musician whose first recording took place a mere 15 years before his death.

Stanley Crouch’s biography is a revelation. Charlie Parker needs no help staying relevant, but Crouch’s work shows that the saxophonist’s accomplishments are based firmly in the African American experience that developed from field hollers through blues and ragtime, tracking a cultural emigration through cities of the South and the Midwest. It is a joyful, painful, ecstatically informative biography. One hopes the second volume doesn’t take three decades. But even if that book never arrives, one thing is certain: Bird Lives.