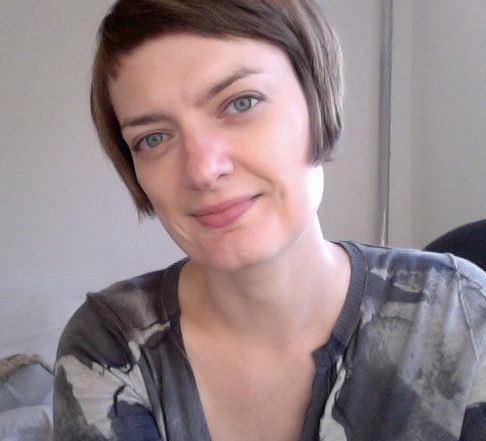 Joanna Penn Cooper’s debut collection, The Itinerant Girl’s Guide to Self-Hypnosis, is a book of certain, searching prose poems that are grounded in New York City, but also grounded in memory and autobiography. These pieces manage to capture the moment of reflection between self and other, between inner and outer life, between thought and action. In a typical gesture, she relates a tale of charming personal significance, then asserts, not plaintively:

Who can you tell this to in New York? No one.

The space between self and other is rich for the writer, and mingling there, Cooper’s prose poems perform a kind of reverse-osmosis. A number of these pieces interrogate the decision to write, making a subject of the choice of subject matter. In so doing they provide insight into the creative mind at work. But this is no stultified confessional poetry. The mind at work here is quirky, urbane, ironic, and steeped in pop culture:

On the bus back, the couples leaned their heads on each other in different ways, and C’s shoulder was bony. Soon my head was somewhere between his stomach and lap, and I drowsed for twenty minutes, holding his hand, my head pressed hard into his abdomen. I felt the flesh under there–all that skin and sinew of a person who let me do these things to him now. After my nap I sat up and whispered fast, I’m going to bite your face, but I didn’t. I think no one heard. I thought, I could write that down. Or I just thought, I have someone I could bite their face; then, I have someone whose face I could bite, all in that voice in my head that means I might write it down.

In allegorical fashion, this self-searching (or self-hypnosis) sparks the same in the reader. Cooper doesn’t often address the reader directly, instead relying on detailed observations of her own and others’ lives to enact the situation of the creative self in the world. When it does address the reader, the poem works on a dual level of discourse between reader and writer, self and other, profound self-reflection and contemporary absurdity:

Have you ever teared up at brunch when you were supposed to be deciding what to order?

Was it due to all the uncertainty of life, the way things keep changing? How nothing is fixed?

Other works in the book transcend the self almost entirely, and in so doing comment upon and reflect contemporary society at large and its place in history. Addressing a letter to the “Dear Twentieth Century,” Cooper writes:

As a very small child in the Nixon years, even I was tired.

But there’s ironic satisfaction to be found in Carole King’s “It’s Too Late” being number one the week you were born.

I wasn’t your best citizen. I couldn’t fix the business of the Panama Canal in my mind, try as I might, sitting in pigtails and watching the news.

The world had heft and weight to it then.

We had Charlie Chaplin and Richard Pryor then.

I was born at the exhausted end of a barbarous century, but we had the good people.

There are touches of Ginsberg’s “America” here, as there are touches of Frank O’Hara in Cooper’s most quotidian New York poems. But the achievement of this collection is that Cooper has fused these influences and others — along with a classical attention to feeling and memory — to a modern, personal sensibility. These are your stories too. The sight of a self-hypnotized girl is hypnotizing, is it not? This is a collection of prose poems that are personal not self-indulgent, sensitive not maudlin, and strong not callous. It is darkly delightful.

Cooper is the author of a previous chapbook, Mesmer, from dancing girl press, and the chapbook Crown, forthcoming from Ravenna Press. If The Itinerant Girl’s Guide to Self-Hypnosis is any indication, we have much to look forward to from this beguiling writer.