Friday Pick: When the Heart Drowns in Its Own Blood 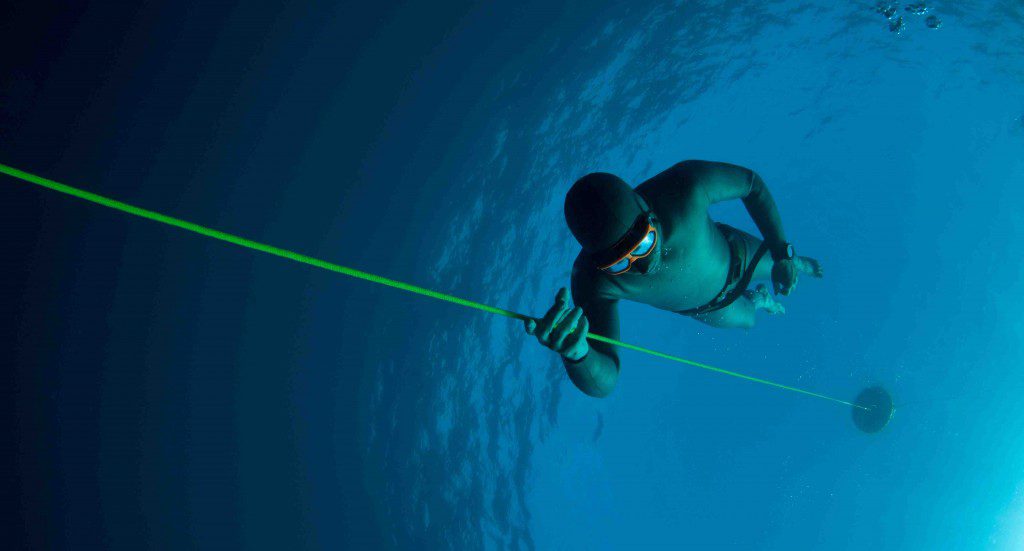 Is there any sport more suggestive of drama and quest than free diving? Termann, the protagonist of Philipp Schönthaler’s novella When the Heart Drowns in Its Own Blood, would certainly answer in the negative. This compelling story narrates a few days in the life of this free diver who has returned to the site of a previous “mishap” to attempt to break his own free diving record by plunging to a depth of more than 200 meters on a single breath.

From the beginning, this story is about more than the sum of its parts. Termann’s quest is equally spiritual and athletic, and he insists at all times on the metaphysical aspects of his pursuit. His determination to reach these unheard-of depths is a desire to transcend the physical, to reach a realm of pure spirit that may or may not be possible to attain:

Termann says to his coach: “At night, when I’m lying awake, I have the sudden longing to be one with the sea, and a fear of losing myself in the waters’ vastness.” Shortly thereafter to a journalist outside at the harbor: “I know that I’m human, and I have to breathe, but down below it loses its attraction. An indescribable sensation of happiness grows within me.”

A simplicity of style reigns throughout, as does the narrator’s insistent refusal to comment on the events that are unfolding. Yet, the story is suffused with subtext, giving it power and scope. At dramatic moments, that subtext becomes visible, as in the moment when Termann lies in bed, unable to sleep:

It’s like when he laid in bed at night as a child, thinks Termann, and couldn’t fall asleep. Through the chimney pipe, he could hear the voices of his parents below in the living room. He could never imagine what his parents talked about for so long, what two people could possibly talk about for so long. That made him uneasy, that there had to be things that were so hard to name.

Here Termann’s essential solitude makes itself fully known. Throughout the story, in the very style of its telling, the distance between Termann and those around him — the same distance that must have motivated him to pursue his iconically individual sport — are dramatized. The detached tone of the narration enacts Termann’s detachment from the world around him as he pursues his goal with a fanatic focus.

Yet the story is animated not only by the tension of the plot, but also by the physiological details of free diving. As the title suggests, Schönthaler is adept at giving emotional, even lyrical resonance to the challenges of physical exertion. And the unfolding of the story, which has Termann more and more frequently distributing monologues on the facts and philosophies of free diving to those around him, allows Schönthaler to supplement the narrative with moments of intense detail:

Even in the 1960s, doctors conjectured that at a depth of fifty meters a human being would be squashed like a swatted fly. The French physician Dr. Cabarrou carried out experiments with plastic containers — the vessels imploded at a depth of forty-five meters. … Today, physicians speculate whether the limit lies before or beyond three hundred meters — the blood is redistributed and becomes so heavily concentrated in the center of the body that circulation fails. “The heart drowns in its own blood.”

At times, the self-consciously spiritual nature of Termann’s approach to free diving is trying. Here the author seems to insist too forcefully on the allegorical nature of his materials, where the story, which is otherwise lightly handled, is more effective when it is suggestive and nuanced rather than obviously metaphorical.

The ending of the story is ambiguous and open-ended in a style that confirms the allegorical tone of what has preceded. Schönthaler has managed to create an intriguing, dramatic narrative out of a single character who exists almost only in name. When the Heart Drowns in Its Own Blood is a minimalist narrative of physical and spiritual exertion that dramatizes the divestment of the individual who pursues his single-minded goals at the cost of all else.

This is the latest publication from Readux Books, a new independent publisher based in Berlin. Specializing in short works of fiction translated from German, They are proving themselves a vibrant source of contemporary European fiction.

Read a review of another Readux title:

The Marvel of Biographical Bookkeeping by Francis Nenik