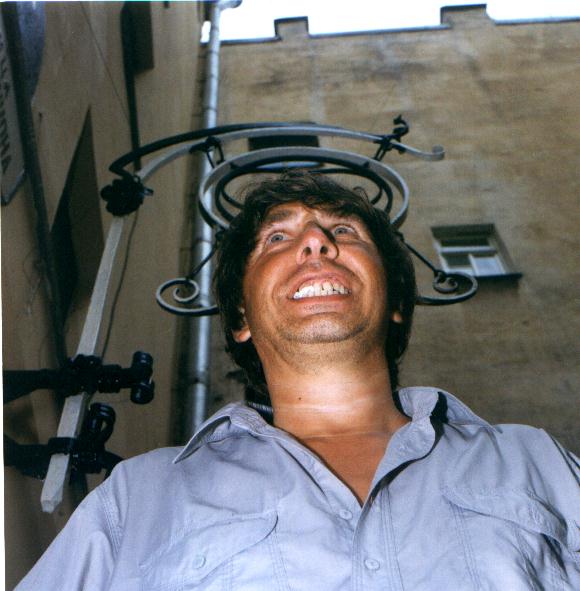 MY FLIGHT TO MALAYSIA

Once I wrote a remarkable fairy tale and decided to take it to Little Trolley, a children’s gazette. I walked into the editorial office, and sitting right there on the table was the editor, thoughtfully gazing at the ceiling.

“Just think,” he was musing to himself, “how much free space that ceiling has. You could put a couch there, or a couple of armchairs, or even a television.”

And here, as it turned out, was where I came in.

“Yeah, so what?” the editor shrugged. “Are you going to order up a dance for the occasion?!”

And right then and there he jumped off the table and started dancing a fiery tap dance, then he performed a pas-de-deux from the ballet Spartak, and as a wrap-up he banged out some good old rock-n’-roll!

“Well, let’s see your little fairy tale now,” he said, panting slightly. “But not too close. There’re mines all around this table. You’ll blow up, and then I’ll never hear the end of it.”

I took the manuscript out of my pocket and showed it to him. The editor, to see better, perched his glasses on top of his nose and stretched out his neck. His neck seemed awfully long. Almost like a swan’s.

“Well, well,” he complimented me. “Outstanding paper, nice type face. We’ll take it, of course. There’s just one thing,” he stopped short. “What do we do about the fee? You won’t take money, will you?”

“No, I won’t,” I answered firmly. “Money spoils the writer.”

“Y-up,” he drawled out in thought, and started digging around in his numerous pockets in a fuss, turning them inside out. And what didn’t he have in there: lighters, fountain pens, the Family magazine files for last year and next, half an apple, a short-barrel .34 caliber Colt, a glass eye, a live hamster named Phil, a raw chicken egg, a doughnut hole, an anti-tank grenade… and much else. Finally, he found what he was looking for. It was a crumpled plane ticket for a Boeing 747.

“Here,” he held out the ticket to me. “In an hour you’re flying to Malaysia. Seems to me that you’re just what they need out there…” He thought a bit and held out the unfinished apple to me, too.

I took the apple and left for Malaysia. As soon as the Boeing 747 lifted off into the sky-blue sky, a pretty stewardess appeared, on such long legs that she had to bend down to keep from hitting her head on the ceiling.

“A good day to all our passengers,” she said, smiling. “My name is Masha. Our flight today will be at an altitude of 6,000 meters. We’re flying to Malaysia. The captain of our crew is pilot first class Ivan Potapov. He is a very experienced pilot. He’s been in five air disasters and all five times he’s made it through alive, when the other passengers and crew all perished. Have a pleasant flight, ladies and gentlemen. Thank you for your attention.”

Then Masha the stewardess walked right up to me on her long legs.

“Excuse me,” she asked. “Are you by any chance Hans Christian Andersen?”

“No,” I admitted reluctantly, “my parents named me something else.”

“But you do write fairy tales? Our pilot Potapov just adores fairy tales. As soon as he found out that you were on this flight, he wanted to meet you.”

I walked up to the cockpit in the nose of the plane. There sat the pilot Potapov and two of his assistants. They were playing checkers. Give-away.

“A-a-a!!!” the pilot Potapov cried out, leaping up and hugging me hard to his mighty breast. “Hello, hello, Mister Andersen. I’m so glad to meet you. Potapov!”

“How can this be?” he was a little stunned. “Wasn’t it you who wrote The Snow Queen? And that story about that, what do you call it… that ugly duckling who lived on the roof.”

“Well, then, goodbye,” the pilot Potapov coldly shook my hand. “If you see Andersen, give him my regards. Tell him like this: ‘Potapov says he sends his regards.’”

And he sat down again to play give-away.

“Pardon my curiosity, but could you tell me who’s more or less in charge of flying the plane?”

“Why, my son, Stepka,” the pilot Potapov said from over his shoulder.

“’Lemme steer, Papa,’ he says, ‘just a little bit.’Well, who am I to begrudge my only son? Steer to your heart’s content!”

“Kid? How do you like that!” harrumphed the pilot Potapov. “Next year he starts school. Kid! The lad’s racked up five years already, so let him get used to being responsible for other people’s lives. My Stepka has got 200 human lives in his hands!” Potapov the pilot said proudly. “Including, by the way, yours. And you say, ‘kid.’”

I shook my head and started back to my seat. I had barely reached my seat when Masha the stewardess turned up again right next to me.

“I want to tell you the most curious piece of news,” she whispered. “Our plane is going down.”

“So what are you whispering to me for?” I replied, irritated. “That’s not my business! Go to that Potapov of yours and whisper to him all you want!”

“Potapov and his crew have gone to sleep,” said the stewardess. “They played give-away all night last night. They didn’t get enough sleep. Now you couldn’t wake them if you fired a cannon.”

“I don’t have any,” Masha sighed sadly. “Maybe you have some?”

I dug around in my pockets and pulled out the apple the editor had given me.

“Here,” I said. “Take him this apple. Let him stuff himself.”

Masha the stewardess walked off, but after a minute came back again.

“I gave it to him,” she said. “That apple of yours. He gobbled it up and now he’s asleep too.”

“Well, he’s asleep,” Masha answered. “What do you expect? The boy’s only three years old.”

“What do you mean only three years old?!” I was more amazed than before. “Potapov said he was five!”

“He added a couple of years, so the state commission wouldn’t catch on and not let him fly airplanes. But, actually, he’s three.”

“O-o-o-o-o-okay,” I’m thinking, “So tha-a-a-a-at’s the deal…” And meanwhile the other passengers are just sitting around: one’s reading a book, another one’s munching sunflower seeds… And the plane’s GOING DOWN!!!

“Alright,” I said to Masha. “Open up the entry hatch, and we’ll see where we’re crashing.”

She opened the hatch, grabbed me by the feet, and I hung upside down out of the airplane. The wind was whistling in my ears, the clouds rushing into my eyes… I got a good look, and below us was… Malaysia. So we could go down with confidence. What do you know, we’d made it…

“We’re landing,” I succinctly reported to Masha the stewardess once she pulled me back into the plane.

And so we started our landing. Upon landing, we were met by a black man. Black as coal, and very polite.

“As you say,” he spread out his arms in greeting.

Masha the stewardess looked around and said, “This place looks more like Polynesia to me.”

“As you say,” the black man spread out his arms in greeting again.

“And who might you be?” I inquired. “Some local savage-cannibal?!”

“Not at all,” he replied. “I’m the president of this African republic, Mister Matunta.”

“So this is Africa!” I cried out in surprise.

“Absolutely right,” the president nodded politely. “Therefore I’d please like to welcome you to our Medical Center.”

“Wh-what for?” I asked. “To get ourselves vaccinated or something?”

“Not exactly,” the president answered. “The thing is, here in Africa everyone’s black. So at the Center they’ll take off your white hides and pull on black ones.”

“Oh, how wonderful!” Masha the stewardess was delighted. “That means I’m going to be black!”

“Couldn’t you just smear black paint on us?” I asked.

“But that would insult your human dignity,” President Matunta shrugged his shoulders. “And besides, it’s all very simple: they tear off your skin…”

“No, no,” I hurriedly interrupted him. “You know, we’re used to insults. So please go ahead and insult us — paint us black.”

President Matunta right then and there fetched some oil paint and, with a brush, painted us black.

“Well, there you go, Mr Ronshin. You’re black,” he said to me. “Congratulations.”

“Sure, here in Africa every macaque knows you,” laughed the president. “You’re the one who wrote this:

“Yes,” I said jokingly, “I wrote that.” (In fact, it was from a poem by Chukovsky, but sometimes, you know, it’s nice to bask in someone else’s fame.) As I uttered these words, I was taken into custody by two guards who looked just like those same gorillas from “my” poem.

“For these very verses. Because of them tourists, along with their children, have stopped coming to Africa. They’re afraid of mean crocodiles and the Barmalei. So, if you don’t write a retraction right this minute… I’ll eat you!”

You can well imagine, I wrote a retraction right then and there:

“Now this is something else, indeed,” President Matunta praised me, and then he named me editor-in-chief of an African children’s magazine, Young Cannibal. Masha the stewardess and I got married, and soon after a black stork brought us a little black girl, who (when she grew up) married Stepka, the son of the pilot Potapov.

Potapov himself began writing fairy tales and signed them “Hans Christian Andersen.” At which the editor of Little Trolley remarked, “Potapov, if you’re Andersen I’m a Boeing 747.” The pilot Potapov was very insulted and stopped reading Little Trolley. But who cares.

VALERY RONSHIN (1962) graduated with a degree in history from Petrozavodsk University in Karelia and went on to study at the Literature Institute in Moscow. He now lives in St Petersburg. He started writing relatively late but broke into top literary magazines almost immediately. Ronshin says that for the first thirty years he was “just living a life”, moving from one provincial town to another and traveling on foot in Central Russia. He worked at different menial jobs and taught history for a spell before becoming a professional writer. As such, his greatest debt is to Daniil Kharms, the acknowledged Russian master of the absurd. Like Kharms, Ronshin is also a successful children’s author with more than 20 books to his name. Unlike Kharms, he wrote the first detective novel for Russian young adults. Ronshin, whose children’s stories appeal to grown-ups as well, considers that “a writer’s job is to describe his age and die.”