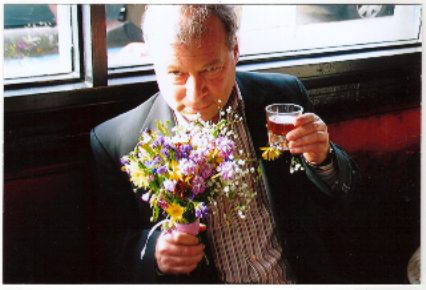 Many of Kleinzahler’s poems are cinematic, portraying a man moving through spaces: Night streets, grocery stores, Chinese restaurants on the East coast and the West. These poems are perceptions of the conscious man in the city, the man seeing the city and merging with it. The title poem sets the tone with insomniac, slightly paranoid energy.

You can feel the rumble of the trains
vibrating up the steel of the hotel’s frame.
They move only very late at night, from three or so until dawn,
north along the river and then west.
There is going on just now a vast shifting of inventory
from the one place to another. I can feel it, inside my head.

Here the night-moves of the city are mirrored in the mind of the man recording them. The phantom undercurrents of a city at night, the behind-the-scenes movements of freight through rail yards and shipping lanes, the darkened other half of urban life — this is Kleinzahler’s province.

These poems do not always complete the urban-human circuit so obviously, but Kleinzahler constantly combines street-corner observance with introspection. The Hotel Oneira continues Kleinzahler’s style of urban poetry. These narrators have lived and suffered and loved and listened to music in the streets and buildings of America’s cities, from Jersey City to San Francisco or, to take the title of one of Kleinzahler’s earlier collections, “Rapid City.”

But the urban character, as well as Kleinzahler’s famed pugnacity, are worn lightly here. “Summer Journal” is an especially welcome variation in form and tone. This series of 12 poems, with titles ranging from “3p.m.” to “Garden out Back Window” to “Golden Gate,” captures the lassitude and freedom of summer in a cycle of deftly handled observations that combine the verve of Kleinzahler’s voice with an openness of form that leads to unexpected ends, or a pleasant lack thereof. Like Kleinzahler’s best poems, whether about music, the city, or what have you, these combine a sweeping knowledge of art, literature and music with a love of language. “Wind/Work” begins with the narrator awakening at night with a word on his lips. That word? “Zamboni.”

Just the word,
not the ice-restoring machine of hockey arenas,
or Mr Zamboni of Paramount, California,
and his ungainly, lucrative invention.
It was necessary that I find the word.
Whatever else happens in the course of the day,
the important work has been done.

This contented ease permeates this collection, bringing to it a sense of enjoyment. The poems that display Kleinzahler’s formidable knowledge of music are equally powerful, whether they are speaking of the emotional impact of Whitney Houston’s singing, or capturing in language the rhythms of bebop, like the poem “A History of Western Music: Chapter 44 (BEBOP),” which begins:

The poem jumps and romps with all the fun-loving energy of Charlie Parker.

“The Rapture of Vachel Lindsay” is the longest poem in the book, and certainly its most vatic. In it Kleinzahler charts the touring of Vachel Lindsay, the traveling bard known more for his ecstatic onstage incantations than his poems on the page. The poem quotes Robert Frost on Lindsay: “‘A very good boy,’ Robert Frost would say of him, ‘a kind of genius;’/ pausing a moment, ‘and just crazy.'” What’s most impressive about the poem is how it captures Lindsay’s rapturous rhythms and combines them with an elegiac tone that carries the full knowledge of Lindsay’s suicide:

Lindsay in his rapture, barking canticles under the Church of Sky,
waving wheat all around him, wheat the color of the sun
clouds like continents above, prairie at his feet stretching on to eternity,
grain elevators disappearing behind him like ships in a geography book,
until the top of yet another begins to loom up in the west,
BOOMLAY BOOMLAY BOOMLAY BOOM, […]
Lindsay, Lindsay, poor little calf

The poem is a brilliant homage. Elsewhere in the collection, Kleinzahler adopts a less bombastic tone. In “1975” for example, he declares: “That dirty aureole across the Hudson is New York.” It is an image that not only brings descriptive insight to the actual, but carries with it all the tension of the New York/ New Jersey divide. Like all of Kleinzahler’s best work, the line touts the baggage of knowledge and experience with brawny grace.

The majority of the poems in The Hotel Oneira first appeared in The London Review of Books. Kleinzahler has won the International Griffin Poetry Prize, and the National Critics Circle Award. As Al “King” Hirt would say, the man is established and then some. Yet Kleinzahler’s voice remains vibrant. His work brings the asperity of Pound and Bunting into a new era, inflected with knowledge of pop culture and high culture alike. And above all, Kleinzhaler is fun to read. Accurate, eccentric, and always on the move, Kleinzahler’s poetry is exquisite noir, a diamond in the left ventricle of the dark heart of Saturday night.

PrevPreviousZsolt Láng
NextWhat Is Vispo? An Interview With Nico VassilakisNext