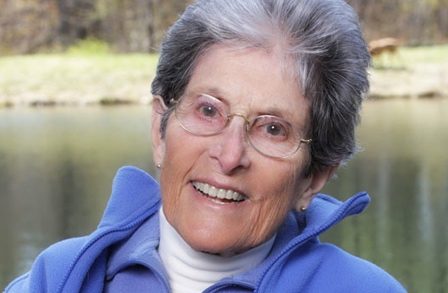 We are saddened by the death of Pulitzer Prize-winning poet and former Poet Laureate Maxine Kumin (1925–2014), one of the finest poets of her generation, and a pioneering American voice.

Author of 17 collections of poetry, beginning with Halfway (1961), and most recently, Where I Live: New and Selected Poems 1990–2010 (2010), as well as five novels and numerous collections of essays and books for children, Kumin was a true Woman of Letters, an archetype that was far rarer when she began her career than it is today. This shift in the tenor of American literary culture is due in no small part to her work.

Kumin established herself as a poet in Boston in 1957, when she studied poetry with John Holmes. Here she met fellow classmate Anne Sexton, with whom she had a deep friendship that lasted until Sexton’s death in 1974. Like Sexton, Kumin explored the depth and conflicting emotions of her childhood in her early poetry, including the title poem of her first collection, in which she writes:

As true as I was born into
my mother’s bed in Germantown,
the gambrel house in which I grew
stood halfway up a hill, or down,
between a convent and a mad house.

Much of Kumin’s early poetry is exquisitely crafted in the Boston-formalist style that was so dominant under the influence of Robert Lowell in the 1950s. It was her depth and range as a poet that caught the attention of early critics. Ultimately, her belief in the necessity of challenging prevailing post-war social and literary mores through the example of a life well-lived and a poetry well-written was a guiding force in her life and work.

Emerging from a successful career as a university teacher, Kumin and her husband moved to a farm in New Hampshire in 1975, where they bred horses. The love of a life close to nature has informed much of her work since. Her 2003 collection, Jack, was dedicated to one of her horses. The title poem is evidence of Kumin’s supple style, her sensuous, intensely particular vocabulary, and the world her poetry inhabits, tinged by seasons, by natural life, and by human memory. “Jack” begins:

How pleasant the yellow butter
melting on white kernels, the meniscus
of red wine that coats the insides of our goblets

the last two of our lives, still noble to look upon:
our first foal, now a bossy mare of 28
which calibrates to 84 in people years

and my chestnut gelding, not exactly a youngster
at 22. Every year, the end of summer
lazy and golden, invites grief and regret…

More recently, Kumin again came to national attention with her controversial “Torture Poems,” which were included in her collection Still to Mow (2007). Based on documents released from the second Iraq war concerning the torture of prisoners by American soldiers, the poems are unflinching in their examination of these acts of cruelty, even as they are guided by impeccable form. Witness “What You Do:”

I had the pleasure of attending a workshop with Maxine Kumin on her farm in New Hampshire several years ago. With keen eyes and a sparkling wit, she presided over a bevy of graduate students only half-successfully disguising their awe of Kumin’s presence. An iron fist in a velvet glove, Kumin would have none of it. Let’s just say, in life as in poetry, she told it like it is. Her life and work are resounding reminders that poetry can be an active social force. Her death is a loss for the American intellect.