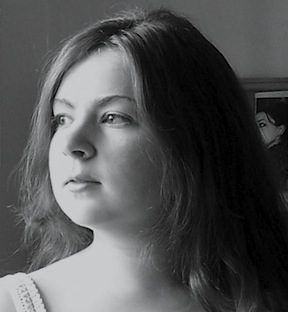 Your father rides down a street
too bright for any memory
with his jacket over his head
to block the sun. His body is bent
like a crow, arms out like two wings
as he pedals blind down an empty street.
Thank God it’s empty, thank God
his faith is larger than a mustard seed—
otherwise we wouldn’t be having
this conversation. Not with you, at least.
Dad says they rode blindfolded
all the time. That was half the fun.
I don’t think I’d walk, let alone unicycle,
blindly down a road I didn’t know.
But that’s why I have the faith of a dust-
flake, and you are suspended,
mid-air above me

ODE TO THE SIXTEEN-FOOT UNICYCLE

You once rode over power-lines,
from cherry trees, out of my grandmother’s
bedroom window, built
by my father who was just a kid,
who became an engineer because
his older brother did—

and what were you? And where
did you come from?

You rode at midnight
down Mt Tabor road,
where my father invented the world
from the sky down.

Without a jacket, without shoes,
he rode you like a giraffe
in a world without streetlamps
or sound.

I see you in the shed, strapped
to the ceiling as if in an asylum
chair, wild and incomprehensible—

Now, you are dusted
and dilapidated, your chains are black
with grease—

he says it would be dangerous now,
to fall from your height,
bones break when you’re older—

I wish I was brave enough
to ride you from one end of the world
to the other, because when
my father is gone, who will take you?  And what will be done with your bones?

You know how my friend died? Dad asks me.
He died because there was a kangaroo
in the road. Because he didn’t want to hit it,
and slammed on his breaks. A car
ploughed right through him, you know.

So when you see something
in the road, he says, hit it. Don’t
stop, don’t swerve. Humans
are rarer than animals.

Despite Dad’s warning, I brake
when I see deer up on that hill. It’s reflex.
I look around, but the road is clear: no cars,
no kangaroos. I live another day.

I remember the dead man’s funeral,
how his wife came up to everyone
and smiled, thanking them for being here.
She seemed awfully brave to me.

I didn’t know what to call her,
or her husband. I almost
called him the Kangaroo Man.

But I wonder, even if I had called him
that name, would she have understood?
Could she remember being a girl, remembering
only how people die, not how they live—
Or could she realize that that night in Australia,
the people who drove by saw what was left
of the car and the ambulance lights, but never
the body? Only that shitty kangaroo on
the side of the road, rotting in glory?

Meg Eden‘s work has been published in various magazines, been nominated for a Pushcart Prize, and received the 2012 Henrietta Spiegel Creative Writing Award. Her collections include Your Son (The Florence Kahn Memorial Award) and Rotary Phones and Facebook (Dancing Girl Press). She teaches at the University of Maryland. Check out her work here.