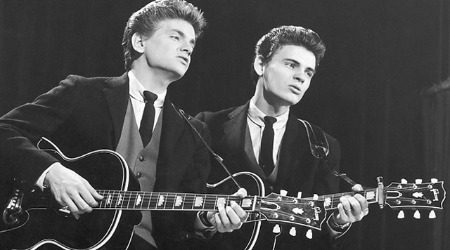 The death of Phil Everly (1939 – 2014) on January 3 inspired an outpouring of tributes for the American singer-songwriter and half — with his brother Don — of the pioneering rock duo The Everly Brothers.

While they have been confined to oldies stations and Shriners Hospital charity concerts for decades, The Everly Brothers are acknowledged by everyone from Bob Dylan to The Beatles for setting the tone of a more complex style of vocal harmony and a greater range of emotional depth in popular music in the late ’50s and early ’60s. The Beatles referred to themselves early on as “the English Everly Brothers.” Dylan credited the duo with “start[ing] it all.”

“All I Have to Do Is Dream.” “Bye Bye Love.” “Crying in the Rain.” “Let it Be Me.” “Wake up, Little Suzy.” “Cathy’s Clown.” These songs helped define the sound of post-war pop. But there’s more going on. Take a look at this clip of “Cathy’s Clown” from Dick Clark’s Saturday Night Beechnut Show in the summer of 1960, the year The New American Poetry was published, the year of the furor over the Hitler documentary Mein Kampf, (not to be confused with the current controversial monitoring of those who read the e-book). 1960. Seven years before the Summer of Love and eight before the Summer of Death. This is the height of American Normalization, when the culture was in a lock-down tight enough for Dick Clark to describe the hit song as “a little unusual, a little strange.”

What is strange, and what gives an interesting glimpse into the culture of the times, is the immediate clapping of the audience, no doubt on cue from the show’s director, and the presentation of the audience as emphatically “enthusiastic” and “with it.” But look at how awkwardly they sit there. Look at the determined stares from the girls at 2:31 and 2:47. Where is the American August Landmesser? It might remind you of Dennis Rodman’s recent performance for Kim Jong-un.

Notice anything similar? While we’re at it, here’s Neil Young just this week commanding the crowd to stop clapping to “Ohio” at a recent gig at Carnegie Hall, apparently shouting “Wrong!” and continuing, “It’s something that you probably don’t know, but there’s a hell of a distance between you and me.” But then again, he’s from Toronto.

This is not to say, exactly, that Cold War America is the same as communist North Korea, or Canada, for that matter. We’re talking about The Everly Brothers. Their finest songs express a singular emotional depth that marked them out as sensitive, real, and even a little strange. Their songs open up the undercurrent of America, the loneliness of the self-made man. Beneath those perfectly pomaded pompadours, encased within the amber harmonies, there is sadness and tragedy, solitary embarrassment (“Here he comes, that’s Cathy’s clown.”), and defiance.

What is the American Character if not a fugitive sorrow, a sandbox justice, a stubborn keeping on. It’s okay to be sensitive, when no one’s around. Like Kerouac’s third “Belief and Technique for Modern Prose“, written while the Everlys swooned, “Try never get drunk outside yr own house.” Do your “Crying in the Rain:”

I’ll never let you see
The way my broken heart is hurting me.
I’ve got my pride
And I know how to hide
All my sorrow and pain:
I’ll do my crying in the rain.

Dick Clark called it right, of course. America is a little strange. And The Everly Brothers were American originals, hailing from a coal mining town called Muhlenburg County, Kentucky. I never got past Bardstown myself, in ’96, when the Heaven Hill Distillery set the place ablaze with bourbon.