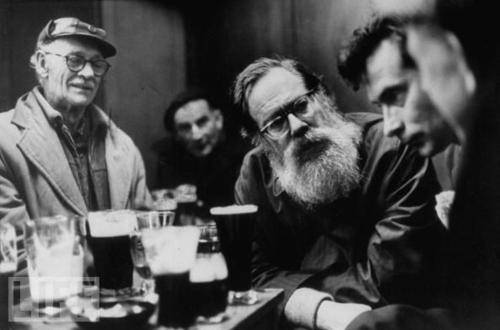 Inspired by the shocking brilliance of #HenryCore, which combines the music of Eminem with the poetry of John Berryman to amazing results, one might be inspired to delve more deeply into Berryman’s twisted world. Nowhere is the sodden side of his genius more in evidence than in his autobiographical novel Recovery (1973), which he left unfinished at the time of his death, and which Eminem may have been thinking of when he released his eponymous 2010 album.

This is the kind of book that would never get published today, and certainly not by a major press. The glorification of alcoholism, as well as the glorification of the struggles of straight white men, have long outlived their day in most literary quarters. But make no mistake, there is art in Berryman’s narrative of his white-knuckle struggles through an alcoholic recovery program, told through the avatar of Dr. Alan Severance, a famous professor, writer and historian. Berryman’s dry, dark wit, and his verbal acrobatics are present throughout, as is a more sober reckoning with personal failure than appears in any of his poetry. It can be difficult to read, and not just because it’s unfinished.

What makes the book interesting as a work of art, if an obviously failed one, is that Berryman turns the 12-step program into an encounter with the sublime. “Change your life” becomes a response to seeing not the archaic torso of Apollo, but one’s own wasted torso in a mirror bolted to the wall.

Throughout the book Berryman gives in to the temptation to put in an appearance, a gesture that is present in all his writing, and in much of the writing of his generation. Though Berryman shifts the focus ever-so-slightly by using Dr. Severance (as he used Henry in his Dream Songs), he also includes a poet named Jasper Stone. Severance’s description of Stone’s work sounds uncannily like a description of Berryman’s (or Eminem’s):

You sound better aloud. Good deal of authentic mania there, black and blue wit, pain — the fellow going on to fresh defeats, flappable, flappable. Surviving however. I bought a lot of the little I could understand. Do you write when you’re drunk?

Aesthetics aside, this is a horrifying tale, and all the more so for the reader who realizes it’s based on truth. Severance is required to write an account of his drunkenness, but refuses at first, since this is the third time he’s been locked away in counseling. What he confesses has much in common with Saul Bellow’s stories about a hopelessly alcoholic Berryman in his introduction to the book.

It was a comprehensive account of twenty-three years of alcoholic chaos, lost wives, public disgrace, a night in jail and a lost job, injuries and hospitalizations, a blacked-out call to a girl student threatening to kill her, involuntary defecation in a public building, DT’s once, convulsion once, etc., … and a month later I had a slip, four or five more over two months, two months’ sobriety, six days drinking, and here I am again.

As when one learns a new word and begins seeing it on every page, a reader versed in #HenryCore can’t help but look for connections, and find them. Consider this line from Berryman’s Recovery:

Middle-aged, physically poor, but strong in brain, indomitable, wipe out the opposition, create as he did in the lab with ballpoint and paper, create sobriety.

Does not that echo with Eminem’s mix tape Straight from the Lab; or the line from his new single “Berzerk,” which goes: “That’s why my pen needs a pad, ’cause my rhyme’s on the rag;” or these lines, likely written by Eminem, in “Forgot About Dre?:

Now all I get is hate mail all day saying Dre fell off. What, cause I been in the lab with a pen and a pad trying to get this damn label off?

Those looking to get their Berryman fix would do well to watch this fantastic six-part interview from 1970. Berryman, sopping, runs intellectual circles around his younger interviewers.

There is a keg of excellent quotes here. The best? “I don’t know what an oboe can do.”