Designing The Body Electric: An Interview With Jeannine Han 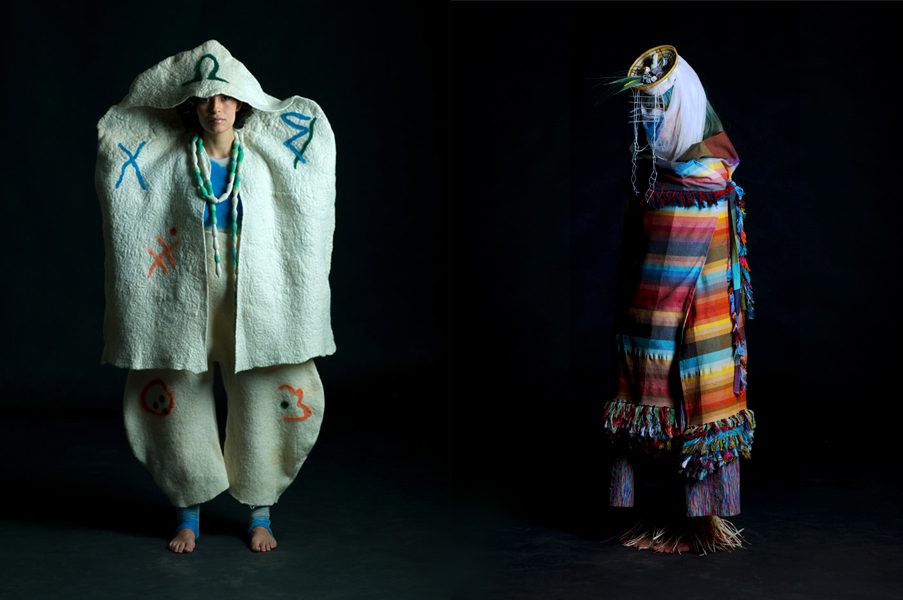 JEANNINE HAN is a New York based designer and artist. Her work with collaborator Dan Riley uses immersive multimedia installations and performances to explore the relationship between pattern, tradition, performance, sound and technology. Their most recent exhibition was at the National Museum in Stockholm, Sweden, where they displayed a series of touch sensitive, sound emitting, future-tribal costumes. B O D Y caught up with Jeannine in her Queens, NY, studio to discuss the making of Electric Ribbon – a technologically innovative project where she and Dan incorporated analog technology into her woven materials to synthetic effect.

B O D Y:  Optical illusions seem to be a reoccurring visual component of your work – from Thermo Cube to Jaquard Knit with Lenticular Structures, can you tell me about this?

Jeannine Han:  Yes, I like to create an altered reality or a reality that isn’t completely transparent but when using textile techniques with applied technology they are revealed. The tactile quality combined with the visual is what I’m most interested in when playing with optical illusions.

B O D Y:  For Electric Ribbon (ER), you integrated electronic signal buses and sensors into your woven fabrics and from these created sound emitting costumes that were touch sensitive.  Do you see the sound that’s emitted as a form of illusion?

Jeannine Han:  The sound is more of a synesthetic effect. We used the same patterns that appear in the visual to create the sound so they both have similar properties and when display/played together create some harmony across senses.

B O D Y:  A harmony born out of a logical relationship of stimulus and response?

Jeannine Han:  More of a genetic relationship. The visual and audio have the same DNA and that’s what they have in common.  Not sure whether these similarities have an effect on the audience but the connection is there.  Just to clarify, we used classic weaving patterns as the data that generates the sound and then the sound is triggered when we touch the clothes.

B O D Y:  Right. Amazing.  When did you decide to introduce sound to your clothing and fabric?

Jeannine Han:  It came from a stream of research projects in Smart Textiles conducted at the Swedish School of Textiles. How it evolved to clothing is that we wanted to introduce the performative aspect of playing music with your body.

B O D Y:  Had you been doing performance work before this project?

Jeannine Han:  It’s funny because neither of us (Dan Riley) are performance artists. The project activated us to become performers in our own instruments.  In the future it would be interesting to see performers using the ER as a tool.

Jeannine Han:  For performers to create their own sound compositions or Movement Artists using touch and sound as a part of their repertoire.

B O D Y:  In your Dream Room you project images/patterns on the walls of the gallery and these trigger sounds.  Is this also an attempt at creating a synesthetic experience?

Jeannine Han:  Yes, it’s the same projection used as the backdrop in the  ER performance.   In ER the touch sensor in the textile triggers the sound and the patterns to activate simultaneously. The actual sounds that you hear reflects the frequency wavelengths generated by the patterns. This was to be able to excite more cognitive levels for both the viewer and performer.
B O D Y:  Do the patterns have their own light wavelength or sound wavelength?

B O D Y:  Do you have synesthesia?

Jeannine Han:  No, I can say that neither of us do but our experiments seem to develop in that direction. Finding the correlation between the senses. At the end of the day, I don’t think that the senses are that disjointed and that  they indirectly cross paths.

B O D Y:  Or that sensations intermingle with one another … sound, touch, etc

B O D Y:  You collaborated most recently with Dan Riley for your ER piece.  How did this creative partnership begin?

Jeannine Han:  We are good friends and working together became a very organic process because there is a shared kinship in our work. The ER collaboration was the most concentrated project we’ve experienced that took over 2 years to make. This allowed us to share each others success, failures and breakthroughs.

B O D Y:  In your work, do you make a distinction between art and fashion?

Jeannine Han:  Good Question! The art world has too much credence when something can be considered art. I believe that fashion has a cultural significance and can share a common dialogue in the discourse of art. I am an artist and my wearable pieces are an extension to my art and ideas.

B O D Y:  When I visited your studio in queens, you mentioned your interest in making films. What do you have in mind?

Jeannine Han:  Yeah, Dan and I have been interested in filmmaking for a while now. It seems like the natural thing to do since there are so many elements to creating a picture. We will be collaborating on this project with our friend Tamara Henderson. The format will be in 16mm film with a tableau that consists of furniture, interiors, textiles, and garments. Look out for that in 2014!