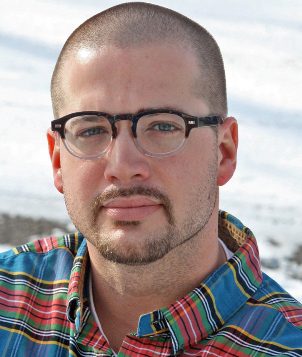 This story originally appeared in the September 2012 issue of B O D Y.

I’m a painter, an artist.

I only signed up for the class because it was a major requirement, because the department forces us to take another art form—dance, acting, fiction or poetry writing—in order to graduate.

They want us to think about the artistic process. About how inhabiting a character on stage, or expressing ourselves via bodily movements, might inform the way we fill our canvasses.

I suppose I had options—I didn’t have to choose to take beginning fiction writing.

Lately, I stretch a canvas and screw it into an easel and just stare at it until I can feel the weight of my eyes deep inside my skull. It’s become a thing for me. Each night, I dream a thousand blank canvasses into existence: each one immaculate, perfect.

In that beginning fiction writing class, I wrote mostly autobiographical stories about the minor humiliations and triumphs a young woman named Jade experienced in smoke- and dubstep-filled rooms populated with hipsterish college students who spent a lot of time eating pills and checking their phones.

My instructor penciled tiny backward checkmarks in the right-hand margins alongside sentences he liked. Occasionally, in block letters so pristine they might have been typed, he would write, NICE IMAGE or I’M NOT SURE ABOUT THIS.

At the end of every story I turned in he wrote a single impregnable and somewhat koan-like sentence, YOU ARE ALL GOING TO DIE SOMEDAY.

When I’m not in class or the studio, I have a job on campus: I work fifteen hours a week placing phone calls to prospective high school students. We aren’t allowed to call them prospies. It’s reductive, degrading.

I spend these fifteen hours pretending I’m an entirely different person. I suppose you could say I’m studying acting, too, though it doesn’t feel like acting. It’s like I’m not even there. Even my voice, it becomes foreign to me.

I talk until I can’t hear what I’m saying. I ask these sixteen- and seventeen-year-olds what they’re interested in, what they’re looking for in a college, and I actually listen—I mean, I truly do, as if these kids are unriddling the world—when they answer.

The job’s highly preferable to dishing out slop in the cafeteria, but there’s this woman, she hands me the list of names each day that admissions wants me to call. This woman is destroying my heart.

Her name is Donna. She’s, I don’t know, forty? She wears mom jeans and embroidered sweatshirts. Like, to work. Without a shred of irony. She’s so sweet, so sincere, it makes my teeth ache.

It’s some kind of cancer that’s spread like a terrible rumor throughout most of her back, neck, and brain. Donna friended me on Facebook and there are all of these pictures.

Casey blowing out the candles on her last birthday cake from her hospital bed, her otherwise bald head wrapped in a bright red bandana. Donna lying in bed with Casey, the two of them cheek to cheek and smiling.

Casey’s dad isn’t around, I guess, because most of the photos are just like this: Donna & Casey, a team, smiling with teeth through the most awful shit in the world.

When I’m in the studio staring down a canvas, sometimes one of the other painting students will come up to me and say something about my patience, my ability to show up to do the work but not force things.

You know, one of them will say, I can’t remember the last time I really looked at a canvas before I started painting it.

When the angel finally visits, another will say, she’s gonna bring you a masterpiece.

I’m in the studio, surrounded by easels, immersed in paint splatters. Music plays from some corner of the room. There was a time less than a year earlier when this space was like church to me, a place I approached reverently, solemnly, my head bowed.

What I don’t tell them is this: I have not in months imagined painting one of the canvases I’ve stretched and screwed into an easel and then spent hours staring at.

When I met for individual conferences with my writing professor, he talked about my use of metaphor. He admired the grittiness of the details I employed, the calculated abrasiveness of my language.

He’s been nominated for a couple awards and is handsome enough but maybe just a little too aware of it. Not once during our meetings did he bring up that endnote he left on all of my stories.

I’ve had some time to process it all, and here’s what I’m thinking: On the one hand, maybe he’s annoyed that he spends his days reading stories by a bunch of kids instead of Dostoevsky and Beckett, his heroes.

Maybe he wrote YOU ARE ALL GOING TO DIE SOMEDAY just to be mean, just to let me know, in case I’d forgotten or hadn’t quite figured it out yet, that my youth, too, shall pass.

On the other hand, maybe he meant something a little more profound. Maybe he wanted me to look past these moments I was writing about to a time when the events in my life—or, um, Jade’s—would matter.

He was fond of using the word gravitas during the workshops. He said it and made this gesture with his hands like he was lowering a stone into water.

Either way, whether he was wanting to be mean or profound: I wouldn’t mind feeding that guy some paint. From the blade of my pallet knife to the tip of his quick, pink tongue.

Donna’s status updates are so dripping with hope I’ve thought about hiding her, so when I log in, I have to look hard to find her and Casey.

I think: If Donna and Casey aren’t in my feed, it will be like they are in some other place. A place completely unlike this one.

In this new place, even the stars that shine at night will look different.

The language the people speak there will be impossible to reduce to emoticons.

And so, each day, as soon as I get back from the studio, I click through a different photo album filled with pictures of Donna and her dying daughter. That girl, she has a smile like a life preserver.

I can’t help but think, though, that, barring divine intervention of the first and most miraculous order, this girl Casey is doomed.

Even if she manages to wake up one day tumor-free and with the right kinds of blood counts, you can see it in her face: the damage has been done.

In most of the photos, she is a smiling sack of atrophied muscles and translucent girl flesh. If there are any thoughts going through her head, you can see it in her eyes, she doesn’t know what to make of them. Everything appears to be a mystery to her. Incomprehensible.

There’s this thing everyone learns when they’re kids about how a single part of the human body stays the same size from the time we’re born until we die.

For a long time, up until I started looking each day at those photos of Casey, I forgot which body part it was. I knew it was somewhere in the face, but that was it.

Some days, way back when, I would convince myself it was not the eyes but the ears. Maybe the lips. The nose.

CHAD SIMPSON won the 2012 John Simmons Short Fiction Award from the University of Iowa Press for his collection of stories, Tell Everyone I Said Hi. His work has appeared in McSweeney’s Quarterly, American Short Fiction, Esquire, and The Sun, among others, and has received awards from the Bread Loaf Writers’ Conference, the Sewanee Writers’ Conference, the Atlantic Monthly, and the Illinois Arts Council. He lives in Monmouth, Illinois, and teaches fiction writing and literature classes at Knox College.