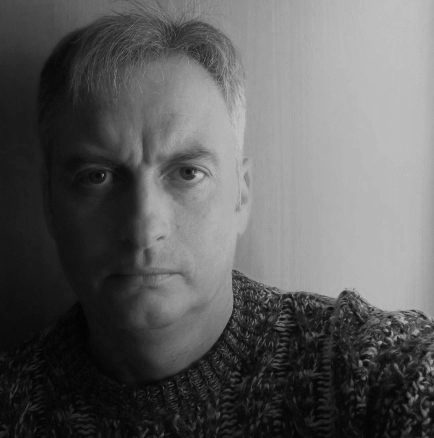 That basement room. In the corner, a gas lamp hissed while a raggedy woman tried to feed her child. I watched steam rise from the spoon. We were huddled round a paraffin heater in the middle of the floor. The fumes were drowse-inducing, but I had to stay alert. It was almost my turn. In overcoats and scarves, we shuffled to keep warm. Someone rubbed his chin, the scrape of bristles. There was no conversation, no attempt to make any.

The heater gurgled while the woman stroked the child’s brow.

A man suddenly came out of the office. He managed a few steps before he collapsed. He was crying. No one moved to comfort him.

I entered, making sure to close the door firmly behind me.

He was sitting behind a mahogany desk of the type favoured by undertakers. But he wasn’t in the business of death. Quite the opposite. If I had been able to pronounce his name, I would have spoken. ‘We value our privacy,’ he said. ‘Please sit down.’

There was no heating. I buttoned my coat to the top and pulled the collar tight.

‘Of course,’ he said, and snipped the end off a fat cigar, ‘I know why you’re here. Your case is no different from anyone else’s. Apart from the, eh, particulars.’

I found this reassuring. Perhaps there was safety in numbers. The thought didn’t last long.

A match sparked and a flame billowed from the cigar. ‘So,’ he said. ‘The particulars.’

The enforced intimacy. This man was a stranger to me. He listened to me in silence. He wasn’t even looking at me. A thin ribbon of smoke twisted up to a pipe that jutted from the ceiling. He balanced the cigar on something made of marble and opened a ledger. He wrote my name at the top of the page. He kept writing till the page was full. Then he read it back to me. ‘Is that everything?’ he said.

I tried to think. It was so cold. And the smell. I was sure, as sure as I could be, that I hadn’t missed anything out.

There was nothing else.

‘As you wish,’ he said. He stubbed out the cigar, which was hardly smoked. I assumed he would keep it for later. ‘Now, these are the things you must do.’

I sat there, shivering. Is this what I had come to? Putting my faith in this person I had never met before, of whom I had only heard mention in whispers, this person I was growing to fear the longer I sat in his presence?

‘Is there a problem?’ he said. ‘You seem a trifle…how should I put it…uneasy?’

I looked at my hands. They were old. Wrinkled.

‘If you do the things I tell you,’ he said, ‘everything will be fine. Your problem will vanish. This is my pledge.’

I was in no position to argue.

‘It is entirely up to you,’ he said. ‘By all means go away and think about it. But bear in mind that I am an extremely busy man.’ He gestured at the door. ‘You know how things are.’

I tried to offer him money.

He smiled. ‘No, no. Not yet,’ he said. ‘You know where to find me. I am sure I will see you again.’ He glanced at the ledger. ‘There are some elements that may need further examination.’

My fingers closed on the door handle.

‘One last thing,’ he said. ‘We all have a conscience. Some more than others. Don’t let yours trouble you, not any more. Things have changed. We – all of us – must make adjustments. We know what the future holds.’

In the waiting room the gas lamp had died. There were even more people than before. The heater was surrounded by children, their faces illuminated in the orange glow as they stared at the grille. Adults, men and women, stood in groups against the walls. I eventually made it out to the passageway. The staircase was lined with silent bodies, shadows. I climbed slowly up to the street, where snow was falling.

ANDREW MCCALLUM CRAWFORD grew up in Grangemouth, Scotland. His work has appeared in many literary journals, including Interlitq, Gutter and Spilling Ink Review. His first novel, Drive!, was published in 2010. A collection of short fiction, The Next Stop Is Croy and other stories, was released in 2011. Another collection, A Man’s Hands, was published in 2012. He lives in Greece.