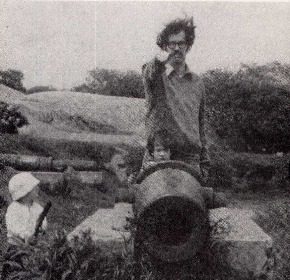 For anyone with an interest in The New American Poetry, which flourished in the 1960s and inspired the most vibrant movements in American poetry in the second half of the 20th century, the poetry of George F. Butterick offers an intriguing alternative to the open-ended intellectual wranglings of Charles Olson and the compressed meditations of Robert Creeley, two of the better-known representatives of this era.

It was a pleasant surprise to find this collection of poems, released in a limited print run in 1988, shortly after Butterick’s death at the age of 45. Butterick is known mostly as one of the original scholars of Charles Olson’s work, and the author of A Guide to The Maximus Poems of Charles Olson (1981). He also edited, with Donald Allen, The Postmoderns: The New American Poetry Revisited (1982), a follow-up to the seminal anthology that launched the diverse movement known as The New American Poetry.

Unexpected gems always shine brightest, and there is a wealth of poetic imagination and finely crafted language in this book. Butterick’s poetry, while often open-ended, shows a wit and a lust for life that is rare in much of the poetry of his era, which was often overly concerned with intellect and philosophy, or else so concerned with language as to be virtually shorn of emotion. Even at their most charmingly original, Butterick’s poems are grounded in the physical world. Witness the opening of “While the Music Plays:”

The band practices until you think you know the song,
then changes it.
The smell of wood punk climbs in
but in a minute more it is cigarettes.
A moth drily flicks against the light fixture.
The drum races ahead, the mind stepping aside:
whatever senses in whatever order. […]
The singer’s breath crushes the microphone.
She left him for a new way of talking,
and from his face came
crushed stars of hurt, visible
all the way to the back of the audience.

There is a sense of time here, a sense of the poem as an event in language, unfolding as the scene it relates unfolded. But Butterick’s language is imaginitive; he never goes for the logical description, as in the phrase “the singer’s breath crushes the microphone,” echoed three lines later in “crushed stars of hurt.” Butterick’s imagery often hovers right at the edge of abstraction, where a strange clarity emerges.

But the occasions that seem to inspire Butterick’s poetry are almost strictly ordinary, especially in his late work. “A Natural Invasion” begins:

The plows have come out. Dare I look?
If I had only listened–how much snow
has already fallen? It is an ominous
reassurance. The quickening of the familiar,
the low steady rumble of the plows,
pushing strangeness, cutting
attention, scraping time off night’s back so that
day is bare
and the treads of purpose have a grip
on which to plunge and plunge
ahead. Love in marriage. What the sea
has no need of, keeping its own traction.

There is much to admire here. The rhythm in lines like “on which to plunge and plunge/ ahead” keeps the poem moving with an insistent forward momentum. The way that Butterick turns quickly, in the center of the poem, from a meditation on the plows to a meditation on “Love in marriage” pushes the poem into universally lyric territory. This is the genuine article; real poetry, New American or not.

Butterick also has that blessing that is so rare in poets: A sense of humor. Several list poems in this collection are laugh-out-loud funny, as Butterick’s delight in language matches a kind of early American hipster irony. “Lost Releases” is a three-page list of made-up music releases. Here are some of the best:

Mickey and the Evangelical Reunion, “Mouse Cakes” / I Saw God at the Barber’s” (Righto)

Hamburg Patty and the Seeded Buns, “The Tinted People Go for a Cruise” / “Have You Got Enough Lotion for That Emotion?” (Dagwood)

Sneeze Pie, “Spread Your Money All Over My Face” / “Beefoleum” (Presto)

The Hyena Twins, “You Constipate My Mind” / “Heave Me, Feed Me to the Rocks Below” (Big Bhwana)

Young Americans for Freedom, “Challenge from Beneath the Snow, or How Dookie Made My Garden Grow” / “I Quiver for Moles” (New World)

It’s refreshing to see a serious American poet not taking himself so seriously. This penchant for wit is evidenced in several shorter poems in the book, as well, including “On Becoming a Professor at 35,” which reads, in its entirety:

I write a poem about the occasion.
It stands up and licks my face.

The dust bin of poetry is big. Real big. Butterick seems to have been consigned there, at least for the moment. But reading his work one remembers, with relief, that things don’t have to end with a bang or a whimper. They can end with a laugh, and a cough of admiration.