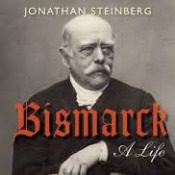 Varying schools of thought remain on the extent to which individuals drive historical events, but biographies are predisposed to connect the biographee with events larger than him- or her-self. Life stories serve as prologue and engines of change.

Among well-known figures, what biographies lack in the element of surprise can be compensated for with hypotheses on where the subject fits into history’s larger arc. In the figure of Otto von Bismarck, author Jonathan Steinberg is forced to contend with the unavoidable epilogue to Bismarck’s life, without allowing it to overwhelm the man himself. When Bismarck dies in 1898, we can’t help but also see the forthcoming domino of events leading to the present day: One world war, economic chaos, Hitler, World War II, a divided Germany, communism, German reunification and the Eurozone crisis. The book may climax with (spoiler alert) the founding of the modern German state, but to adapt the aphorism of another portly statesman, the end of Bismarck is hardly the end of anything, nor is it the beginning of the end – rather it is the end of the beginning.

Bismarck is not personally responsible for any of the aforementioned events – nor does the author make any such claim. Still, the social forces that Bismarck mobilizes to come to and maintain power, taken to their logical conclusion, tip that first domino toward future catastrophes. Strands of anti-Semitism, militarism, nationalism and the like are all parts of the 19th century Prussian political status quo. They are not merely drifting around in the Teutonic ether, but often the very channels through which Bismarck and his allies advance, retreat and maneuver, instrumentalizing them as they see fit. Bismarck and his 30 years at the apex of German politics is the lens through which what came before is refracted into what comes next.

Born to a middling landowning family, Bismarck was a child of privilege though not a part of the truly upper crust aristocracy. While fond of martial fashions, he largely bypasses active military service and goes on to study law at university. Whereas another famed draft-dodger, George W. Bush, spent his formative years as a cheerleader, Bismarck has a taste for dueling with knives. In a sign that the fires forging future leaders burned a bit hotter in the Iron Chancellor’s day, Bismarck is said to have engaged in 25 such tête-à-têtes in one three semester stint. Out of college and into his early adult years, the Mad Juncker – another of Bismarck’s nicknames referencing his landowner status in conjunction with a series of horse riding accidents, plus “his pistol stories, his occasional romances, his extravagant conversation, and unconventional views” – is something of a drifter. He bounces from job to job – a bureaucrat here, a farmer there. Aimless and in search of a calling, Bismarck opts for the favored vocation of leisured class itinerants: Politics.

It turns out to be a good choice. In Bismarck’s case, handy with the steel translates into skilled at blunt force politics. His new career and basic ideology (though pragmatism and alliance-building play a role) are suited to the times. Prussia, the would-be Germany and Europe at-large are in tumult. Reactionary forces had only tenuously contained the widespread unrest of 1848 – events some have compared to the more-recent Arab Spring. Partially out of conviction and partially out of pure strategic calculation, Bismarck mobilizes nervous conservative forces in Prussia. An infatuation with the wife of an associate sees Bismarck convert to an austere brand of Lutheranism – though luckily not for long. Not unlike the way American politicians of the recent past mobilized bases of support among evangelical Christians, Bismarck uses the network he encounters in Pietist circles as a political launching pad.

Conservatism in 19th century Prussia bears many of the traits of later political phenomenon in Germany. Once Germany is united in 1871, and while in power, Bismarck shuns expansionist currents in favor of balance-of-power tactics even as triumphalism implicit in German unification makes it difficult to cram the imperialist genie back into the bottle. Bismarck is a committed monarchist and as such does nothing to liberalize the German constitutional order, instead doing all he can to prevent it. This unknowingly sews the seeds of a political culture that will see Germany destroy itself twice in the next half-century. Bismarck’s hatred of Catholics is surpassed only by his loathing of socialists. This antipathy for leftists proves both the driving force behind landmark welfare policies (as he sought to undercut socialist appeal to workers) and contributes to his eventual fall from power (as maniacal efforts to repress socialists drove away former allies).

Arch conservatives of Bismarck’s ilk tend to get a rap for being real bastards – and deservedly so. But politics aside, it would seem time well spent to join Bismarck in throwing down a tankard or two of Prussian lager. Hearty soul that he was, he begins each morning by tossing back a brew. Add statements like “I love contact with women, but marriage is a dubious proposition” to the mix and serious archival inquiry indicates Bismarck as something of a (to use the parlance of the times) good-time Charlie. While no doubt a cold, calculating political operator, as budding autocrats go Bismarck is more Kim Jong-un (Kick back with some Hennessy, chill with Dennis Rodman) than Dick Cheney (Scheme military contracts, trade in vital organs like spare car parts). Bismarck’s personality contributes mightily to his ability to gain and maintain power far beyond what the title of chancellor granted him. While Steinberg notably neglects to question why so few of us quaff from tankards today, he spends considerable time delving into the riddle of how Bismarck wielded so much power for so long. Bismarck is not elected and serves exclusively at the pleasure of an all-powerful Kaiser, and yet in practice does largely what he pleases. In Steinberg’s judgment the explanation for Bismarck’s success largely comes down to one thing: Charisma. As one British noble said after meeting Bismarck, “The demonic is stronger in him, than in any man I know.” In short, Bismarck uses personality to translate potential into actual power, without the aid of mass media and despite a pair of Chewbacca-style eyebrows.

Charming as the push-broom mustache and husky-cut waistcoats were, Bismarck amounts to much more than a pretty face. He oversees the construction of tens-of-thousands of kilometers worth of new railways in the German Empire – a state-centric program of spending on infrastructure anathema to British or American conservatives of today. He also builds something resembling the world’s first welfare state, beginning in 1881 with health insurance, and before the end of the decade adding worker’s compensation, disability insurance and pensions. Group such accomplishments with the very creation of Germany, and there may be no purer example of the word statesman. He was literally a man who created a state. For his ability to strategically manipulate foreign alliances, Bismarck remains the envy of present-day international relations realists like Henry Kissinger. Alas, as Axl Rose might posit, nothing lasts forever, even Otto von Bismarck’s reign – and he is un-ceremonially dismissed as chancellor when Wilhelm II takes the throne. Past his prime, Bismarck’s final years resemble those of characters at the end of Scorcese films – bloated, half-sedated, paranoid and fond of gun play. As Steinberg writes: “That Bismarck’s health, temper, and emotional life deteriorated the more successful he became, has been one of the most striking findings of my research on his career. His vices grew more vicious; his virtue less effective.”

Aided by the remains of Bismarck’s prolific and literary letter writing, Steinberg’s examination of his subject is a masterful, if not perfect, one. As anyone who becomes so thoroughly engrossed with their subject might be, he occasionally risks drifting into hyperbole – for example, referring to Bismarck’s work in the decade leading to German unification as “the greatest diplomatic and political achievement by any leader in the last two centuries.” Depending on the definition of great, biographers of Lenin, Roosevelt, Mao, Gandhi and others would almost certainly disagree. Still, the Bismarck legacy is undeniable. Without him it is worth wondering whether anything resembling present day Germany would exist. At minimum, 20th century European and world history would have been markedly different. The biggest of voids would no doubt be felt in the capital city of America’s great 39th state. Gandhi, North Dakota just doesn’t have much ring to it.

BENJAMIN CUNNINGHAM is a Prague-based writer and journalist. He covers Central Europe for The Economist.