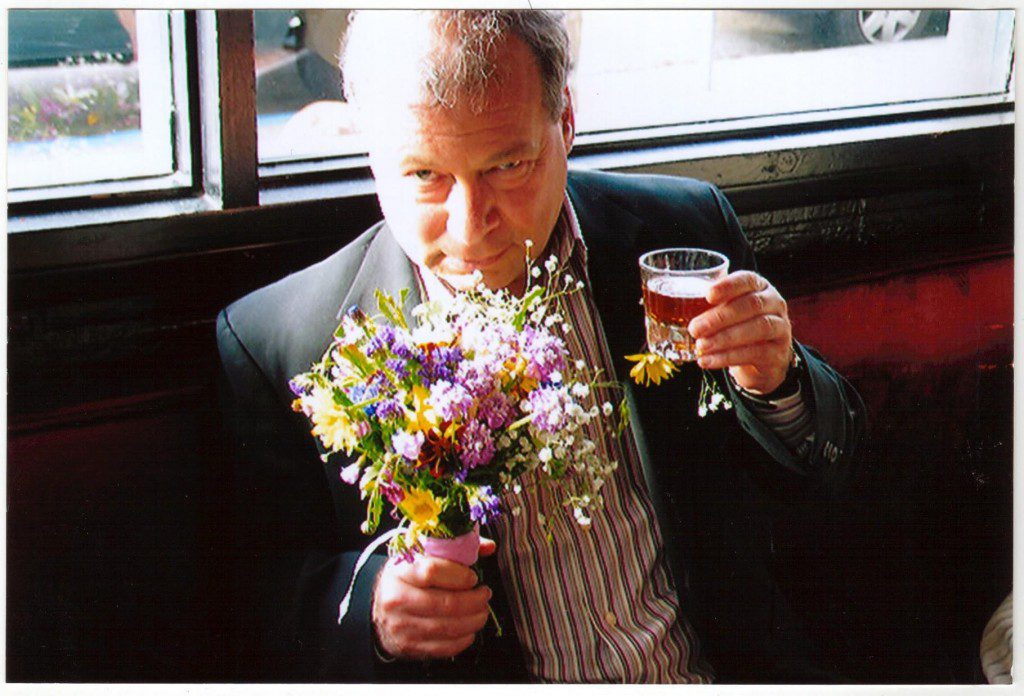 In poetry and in prose, August Kleinzahler is a writer of attitude, which is to say voice. His penchant for mingling high and low diction, erudition and panache, make Kleinzahler an interesting example of the options open to contemporary American poets. The pugnacious nature of his criticism — his feud with Garrison Keillor is particularly humorous — as well as the spectrum of his interests — his prose publications include a collection of essays on music, and a memoir about the life and death of his brother — make him one of the most eclectic poets of his generation.

At times Kleinzahler’s voice is a put-on, as in the poem “Noir,” which, as the title suggests, utilizes the voices and tropes of the eponymous film genre.

Foghorns trade calls in the night
as if lost, seeking one another out,
sometimes in the key of A,
sounding out there by the cliffs,
sometimes in G or C,
depending on how the fog is blowing,
but always at their loudest right before dawn.

A fine rain falls.
The actors scuttle back to their trailers
after hours of hitting their spots,
muffed scenes, take after take,
shivering out there under the helium lamps.

There is an induced coolness here, as Kleinzahler nods to the requirements of the noir voice: The night fog, the jazzy overtones. Yet there is a delicacy to the language and a felicity to the individual word, present most clearly in the simplicity of “A fine rain falls,” a remarkably unremarkable and yet perfectly accurate line. A discrete wholeness.

If noir is the province of lost souls seeking the dark heart of Saturday night, Sunday is perhaps the least noirish of days. Kleinzahler is also a poet of Sundays. Not the Sabbath, but cancerous Sunday afternoons, the slow decay of the worker’s peace of mind as Monday morning approaches. Kleinzahler’s Selected Poems contains three Sunday poems: “Sunday Nocturne,” “Sunday in November,” and “Sunday, Across the Tasman.” In the first, Kleinzahler’s concern with language, and with the poem’s layout, is clear. The poems begins thus:

Red pulse the big jet’s lights
in descent.
The aerial
on the plumber’s duplex shakes.

Along these palisades the crowded
grids subside.
Tonight

even lawyers
and hoods
approach the foothills of reverie.

No pizza slice for the wayfarer
at this hour.
Get thee to an inn, sport.

Kleinzahler has named Ezra Pound among his influences, but here he approaches the crystalline colloquialism of another (like Kleinzahler) New Jersey poet, William Carlos Willams. Despite their affinity for street-wise diction, Kleinzahler’s city poems often read as urban pastorals. This is partially because of the poet’s mingling of different levels of speech. In the above poem, the juxtaposition of “hoods” with the elevated phrase “the foothills of reverie” is striking, not to say charming. This technique is even more apparent in the closing lines of the above quote, as “Pizza slice” bounces off “wayfarer,” and “thee” addresses “sport.”

As a poet, Kleinzahler is subtle and exciting. In other words, cool. His prose is chatty, but maintains the energy of a fine monologue. His collection of essays on music, with the delightfully Alan Dugan-esque title Music I—LXXIV, is erudite and entertaining. Kleinzahler’s knowledge of music is impressive, spanning Thelonious Monk to Liberace, to Bach, and many more. Kleinzahler has the voracious knowledge of the obsessive autodidact. More importantly, he has the chops to craft finely tuned essays. “Music II” begins:

Then there was the time I sold all my CDs. Well, not all of them. I kept seventy-five. I had two thousand-five hundred CDs spread out over ten big shelves, and not one of them did I wish to part with. Which may sound extreme, but bear in mind that those ten shelves represented several years of exhaustive sifting and winnowing through thousands of other CDs, less critical to my listening pleasure and notions of the indispensable…

After describing the pain of parting with his beloveds “at Recycled Records on Haight Street for four or five bucks apiece,” Kleinzahler transitions to an intimate portrait of San Francisco:

It can be mighty quiet on a foggy Tuesday afternoon out there by 20th and Lincoln, just off the park, with the barber on the other side of the parking lot re-reading the Chronicle sports section and the elderly in the Kentucky Fried Chicken next door lingering over their coffee…

But the collection isn’t all images and personal stories of loss. Kleinzahler has a knowledge of all the deep cuts, and a knowingly off-the-cuff manner of letting the reader in. He’s constantly beginning paragraphs with phrases like: “Actually, by 1973, when I saw [John Lee] Hooker in Juneau…”, or “It’s most interesting, hanging out with a composer, at least a composer of Betsy Jolas’ gifts…”, or “Before heading off to the Champs Élysées to check out the record stores….” This is hip erudition.

In both prose and poetry, Kleinzahler’s tastes are as eclectic as his style is precise. His voice is crafted and his vision is exclusive. Yet, by casting his eyes, and his voice, on such a variety of subjects, he achieves the flexible immutability of a jazz solo.