Friday Pick: All of You on the Good Earth by Ernest Hilbert 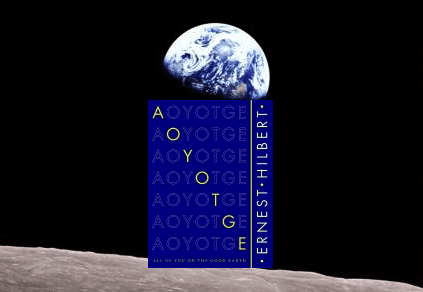 All of You on the Good Earth

On December 25, 1968, Frank Borman, a crewman aboard Apollo 8, the first manned spacecraft to orbit the moon and the first to broadcast images of the earth as seen from a distance, ended the crew’s Christmas greeting to the half billion or so people watching NASA’s live coverage of the mission with the following salutation: “Good night, good luck, a Merry Christmas, and God bless all of you – all of you on the good Earth.” It is this last statement that Ernest Hilbert selects as the title of his second full-length collection of poetry, All of You on the Good Earth, a remarkable follow up to Hilbert’s impressive Sixty Sonnets that offers a very similar sense of the “goodness” of the Earth.

While less prominent in our cultural memory than Neil Armstrong’s iconic “small step … giant leap” broadcast 17 months later, Borman’s closing statement is, in many ways, the more deeply profound of the two – for the astronauts, in shooting for the moon, had discovered Earth. Despite being the first humans to view the lunar surface up close (“The moon is essentially gray, no color,” reads the transcript) it was the sight of the Earth rising from behind the Moon’s own horizon that caused the most excitement.

Borman recalled later that it was a “beautiful, heart-catching sight” that “sent a torrent of nostalgia, of sheer homesickness, surging through me.” The reaction was pretty much the same back on Earth. It was as if a mirror, for the first time, had been suddenly held up, and the entire planet was confronted with the exquisite fragility of its own beauty.

That the mission had been widely believed to be doomed (Apollo’s own program director had given the crew a less than 50/50 chance of making it back alive) only added to the poignancy of the crew’s message. “All of you on the good Earth” was not meant as a generous statement, but rather as an expression of humility made by three people, very far away from home, who had become suddenly aware of humanity’s place in the overwhelming expansiveness of space.

In All of You on the Good Earth, Hilbert offers a view of the world that is similarly expansive. He takes stock of the Earth as a whole, in all of its sublime beauty and chaotic madness, giving each facet its equal due. There is an essential kindness in Hilbert’s poems, a humanity of perspective that treats even its most abject subjects with humour and empathy, regardless of their foibles.

But what makes Hilbert’s poetry great – what gives his poems their power – is his sheer mastery of poetic form. These are poems of real depth and resonance, gorgeously constructed and brilliantly executed. The poem, “Drop Out,” provides a great example of the deftness with which Hilbert uses humour to lead his readers to a perspective of kindness. By allowing us to laugh, he is able to create empathy for a laughable character:

The opening lines of this sonnet are hilarious. The word “advanced” arrives like a punchline. First, because it’s so unexpected; second because it’s in quotes, which always makes mis-associations funny. What follows is equally funny (“sent … / Home with aspirin for an entire year”) but by the time we get to “sell your books,” it starts to become clear that Hilbert isn’t joking. The volta happens early, with the shift in tense from past to present, but with characteristic subtlety, Hilbert seems to let our awareness of the turn come later. Perhaps it’s meant as a kind of empathy test – is it the “flood / Of failures” that grabs you? Or the fear of being “a week late” too? How about the feeling of feeling “cheap”? And what about those screams? With superb execution, the poem pulls up at the last moment, injecting a fresh dose of macabre humour, which, like a second volta, pushes our attention once again away from ourselves and out into the mysterious world of the poem beyond the poem.

That Hilbert’s sonnets feel more open, and read more naturally in the cadences of modern speech than traditional English sonnets, is a result of Hilbert’s formal inventiveness. For Sixty Sonnets, Hilbert invented a new kind of sonnet that fused the more flexible elements of the Italian sonnet (the sestet) with the one-two punch that closes the English sonnet (the couplet). “All of You on the Good Earth” continues Hilbert’s use of this form, and arguably to far greater effect. The double sestet gives the poem both structure and breathing space, while the couplet provides a rhetorical power that Hilbert exploits with relish. He is definitely one of those poets about whom one can say, Yeah, he’s got great endings. But more significantly, Hilbert uses his departure from traditional forms to move the sonnet tradition itself forward.

As a formal technique, Hilbert’s sonnet form is both familiar and disruptive. On one hand, it almost refuses to call attention to itself, slyly building tension through more audible internal rhymes, only to deliver a resounding punch – that poetic boo-yah! – with a perfectly executed couplet at the end. A casual reader of poetry might not notice at first that she is reading – or hearing – a sonnet, until that couplet appears. The openness of the Italian sestet relieves pressure on the rhymes, allowing the poems to employ more natural cadences and rhythms without working against the form (e.g. by overusing enjambment or end stopped lines), while giving the poet enough flexibility to heighten their audibility as needed. The result is a breathtaking lyric balance. And while it may have been unheard of in Petrarch’s day, for example, to end a sonnet with a couplet, Hilbert’s decision to mix it up reminds us that the sonnet is essentially a progressive form, one that invites invention rather than precludes it. It suggests that the challenge a contemporary poet faces is not to find the best way fit to contemporary subjects into archaic forms but to make those forms adapt to the currency of contemporary speech.

In this way, Hilbert stands firmly within the tradition of great sonneteers – from Spenser, who fused his quatrains together with couplets (abab bcbc …etc.) to reduce the pressure on the final couplet and, perhaps more radically, used traditional techniques to subvert traditional expectations, such as in “Sonnet LIV” where he uses a traditional volta indicator (“but”) to distract the reader from the real turn (starting with “what”) that occurs when the rhyme scheme changes; to Milton, whose variations on the Italian sonnet form not only freed the sonnet from the prison that was the sonnet sequence, but showed that form itself could be subordinate to subject. (Milton’s willingness to reposition the volta, for example – a conventional no-no of the day – perhaps even anticipated his bold abandonment of rhyme itself in his magnum opus – a veritable sin by comparison.)

What makes Hilbert’s sonnets great is the way his sonnet form becomes part of the underlying structure of each poem, rather than the surface upon which it plays. It is this approach that allows Hilbert to create a truly American sonnet – not an “American sonnet”, but a sonnet that is spacious enough to contain the cadences of American speech without sacrificing any of the formal elements that make a sonnet a sonnet. If you don’t believe me, check this one out – it’s hilarious.

In a cultural moment in which it seems almost anything can pass for something else as long as it’s got the right label on it; in which it is enough to simply title a poem “Sonnet” in order for it to be considered as such, regardless of the number of lines it has, or whether it has any recognizable form at all – (as a blog post on Poets.org laments, “today’s sonnet can often only be identified by the ghost imprint that haunts it”) – it is refreshing to read poetry that doesn’t have to bullshit about what it is. Hilbert can write a sonnet that sounds so natural – and so casually American – that heard aloud, one might not even recognize it for what it is. Or rather, one would recognize it for exactly what it is: great poetry.