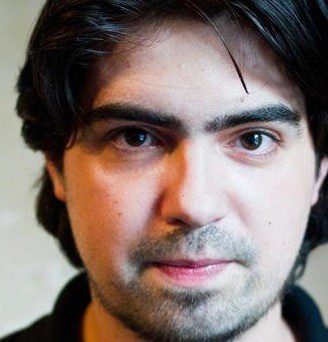 Georgie sat down on the bench, in the park across the street from the main railway station in Bucharest, that park that no one, absolutely no one had told him about ever since he had come to The Great Capital to make a living for himself, just another good fellow from the southern counties – because here, meanings stray from words in the air that gathers the energy of the sins of anonymous dying souls.

And no, he wasn’t scared when, less than a couple of minutes after getting there, a gypsy guy asked him for a cigarette, he handed him one, politely and glad to be of use, and then he was asked calmly, like going through a list, what he would like. Women? Fat women? Slim women? Hairy women? Little girls? Virgin little girls? Boys? Depilated boys? Virgin boys?

And no, he still didn’t show any sign of being impressed at the offer of cell phones that would have made any mobile carrier hide in shame. No.

The click happened when the bench across from his was taken by a woman dressed like a scarecrow, holding a baby. Before he had a chance to wonder what normal mother would take her offspring out for a walk in the park of the damned, the lady pulled up her shirt, took out a tit and got it ready for the kid.

Disgusting or not, the idiot felt turned on for a few seconds when he saw her nipple so close. Poor Gigi, he hasn’t seen a real nipple in over a month.

The woman squeezes her soft tit, wiggles it a little, then she puts the baby down next to her on the bench and pulls at the breast until it reaches her mouth. Yes, the sour, mop-faced apparition in her thirties starts to suckle herself. This isn’t the Twilight Zone, this is the heart of a European capital, the idiot remembers, freezing to the spot, and then he understands.

He understands, first of all, that he’s actually never been hungry. Not really hungry. No, by the ripe age of twenty-nine he’s felt a craving for this or that thing, or the occasional slight pangs. But not hunger, never hunger. He understands that although he only has thirty-four lei in his pocket which he’ll have to stretch over another couple of days anyway, until payday, he’s never been poor. He’s never been rich either, of course, but never poor, even if he spent a few days in the streets, which he never put in his résumé, before he found a grubby room with a kitchen out in the sticks. The idiot realises that his life so far has been going fine, or at least it has been going. But no, he’s never been poor.

And he also realises, idiot that he is, that he’s actually never had problems. Oh, sure, small misunderstandings, the kind that happen to anyone, minor illnesses, nothing deadly if you think about it, small stings and other hitches and rashes, venereal or not, light arguments, all part of life, one sentimental depression which came and went, more or less smoothly, depending on the person you’re talking to, but no real real problems. Absolutely never.

He suddenly remembered a few drinking buddies, his mother back home, his Janie-honey who was about to get there by the 5 o’clock train. He remembered everything and told all his memories to go fuck themselves.

He got up and left. Not for the station – bye-bye, Janie! Go to hell, you and your big, green eyes! Not for the bars. Not home. He went for a walk, feeling that he had just lived through the best life lesson, though his tinny little mind hadn’t assimilated it just yet.

But he knows! And that might just be the most important thing to the idiot. That he knows, even if he doesn’t understand.

He knows that, no matter how hard life kicks him, the way it tends to do with the underdogs, he will never fall down. No, everything will be different from now on.

If Americans have their dozens, their hundreds of cartoon superheroes or Hollywood starlets with their perfect smiles, if Christians have their God and Muslims have their Allah, if gays have George Michael and girls who just got their first pubes have Lady Gaga, he now has Little Mary. That’s what he’s called her, no matter what her real name may be.

Little Mary in the park across the train station will always come to him, like a muse, like an angel, like a goddess, like a true princess. She will descend each night to his creaky, stinking bed, she will take out her sweaty tit, she will pull it forcibly to her mouth and she will start sucking on it, suckling her hunger away.

If he gets fired from the construction site, Little Mary will save him. If he gets caught for stealing, Little Mary will sit next to him in his cell, with her saggy tit. If the communists come back, as his old man kept telling him with terror in his voice, then let them come. Let Băsescu be reelected as many times as Romanians, in their incurable stupidity, want him to be President, while they get their one day of happiness from bagfuls of flour, oil and chocolate bars from politicians and their campaign team.

Come what may, Georgie has just realized that he’s a man. A man who can face anything. A man to whom God has sent the sign for which he had prayed for so many years and asked so many questions: Little Mary! Little Mary and her magic tit. Her formidable tit that changed his destiny. Little Mary from the train station, before whom Death itself would stop to stare in disbelief or to stick a finger, if not its whole scythe, down its throat.

Yes, life. A mother’s nipple in her own mouth, life. Eating your own milk for life.

ANCA BĂRBULESCU is a professional translator and interpreter. She is native Romanian speaker fluent in English, French, Spanish and Catalan, and speaks a little Japanese as well. She has translated a wide variety of writing, both fiction and non-fiction.