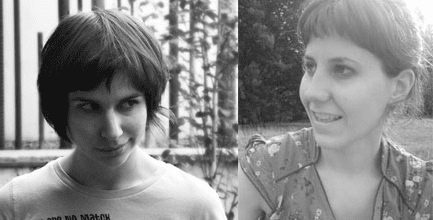 wo British female poets who have been getting some recent attention for their work are Kirsten Irving and Emily Berry. Both youthful and darkly-humoured, their poems are very much poems of the time. Which is to say they take some of their cues directly or indirectly from some popular current American (make that international English language) tastes and add what I think of as being a more traditional British style of thought. No bad thing when when the poet has enough about them to work themselves deeper under the surface sheen of speedy, smartarse contemporary poetic fashion. Irving and Berry can do. Add to that a British mindset, some good British turns of phrase and you get an intoxicating potion.

The cover art of Irving’s Never Never Never Come Back is a stylized and charming picture of a cartoon kid in homemade armour being chased out of a field by some monster types. And the book is somewhat nightmarish and cartoonish, always with humour but the black black one.

Poets need an ear but an eye helps too, and Irving has an enviable eye for observation. Take “Hotel Midgard” from the first of the book’s four sections:

“Sometimes you won’t see him for months
and then a two day booking. He is either
shy, famous or masking an affair,
because the register is a devil’s own mess:

(If those are some of the names he goes by, this guy also has a righteous ear– for AKAs.) The poem continues:

“Some visits he strides into the lobby
full of piss and vinegar, yodelling…

…There are days when he turns up
soaked in seawater, incoherent…

…He blinks at each new Saturday girl
like a robin at a strawberry.
Later that evening, he’ll slump in
worse than drunk, limping,

demanding the master key
through a fat lip, in the greyscale voice
he’d use to announce his betrothal
or a snake tensing in his shoe.”

Irving’s mastery here is in selecting just the right word or image for each occasion. The protagonist sizing up the Saturday girls like a robin eyeballs a strawberry is a very English image and the use of “greyscale” has an immediate effect when placed in the context of his betrothal (we can imagine why he might be obliged). Part (cool) bastard, part Indiana Jones. What a damnable cad!

If you remember the man who advertised on the internet for a person who might like to kill and eat him…? “The computer expert’s penis” describes the cannibal Armin Meiwes’ continuing hunger, even in prison, for human würst that has been “garlicked and white wined”. Here is where Irving’s musicality comes into play, alliteration, assonance and consonance drive the poem flip-flapping down the page. The opening is a good illustration:

“…was a wave of a wand to fry.
It sliced like swiss roll, falling damply free
of its skin stocking.
The meat’s ghost rose in the bouquet…”

“Out There”, from section two is a very good poem. In quatrains and an ABAB rhyme scheme each line is taut, charged with tension:

“There’s a nutter, Merinne, she bellows.
Down in the village. Get your bike…

…He’s turned over the tombola, Merinne,
she pipes, and chased a bunch of cats,
and Lucy says he’s only wearing
a nightie and a captain’s hat…

…I’m scared, I’m afraid that if we look,
he’ll turn, and it’ll be my teacher,
my hero in that stained pink frock,
smeared with blush, somebody’s father…”

This is a lean and mean poem, the end rhymes are unobtrusive and natural, the sentiments uncomfortable: glee and schadenfreude versus fear and compassion. Irving knows that most of us have a little cruel streak that might surface under certain circumstances.

Irving doesn’t like wasting words. She picks the right ones often enough that no padding is needed. In “Splitting the Ego with Mary” we get a description of a teenage girl’s…well…

“It was a baby mammal, curled and spineless
with a paintbrush tuft of hair.
It sprang and gave at my stumpy touch,
teasing that it would lick me
up to the elbow.”

Baby mammal / curled / paintbrush / sprang and gave. Each word is particular and the image is vivid.

In “Straight to You’ (Nick Cave makes an appearance) people in a winter scene “have crunched off to get cocoa” and in “Fishing”:

She manages to capture the things around her in such colour and precision.

It’s a weird little world Irving has conjured, a creeping bad dream filled with insane laughter which you suddenly recognize as your own.

mily Berry is on one of the big publishing houses: Faber and Faber (her co-editors at the British anthology of art and poetry S/S/Y/K, Sam Riviere and Jack Underwood, were both selected for Faber’s New Poets Series). She won an Eric Gregory award in 2008, a traditional starting point for British poets on the way to the top.

This is her debut collection and much has been expected of it. Any poet with a debut collection coming out on Faber and Faber, like it or not, will be placed under scrutiny at quite a young age…unless of course they are old and Berry is not.

Dear Boy reads as a unusually discerning and engaging teenage girl’s diary might if she leafed through it in adulthood and imposed upon it some of the things she had learnt since.

Dear Boy then, might be read as an attempt to understand and be understood by a boy, or boys, or indeed men, although “Dear Man” as a title wouldn’t quite suit Berry’s sweet, youthful and idiosyncratic phrasing.

So, first book, first poem: “Our Love Could Spoil Dinner”.

“We always breakfast with the biographer.
On day one I showed him my grapefruit spoon;
it has a serrated edge. My father gave him
a Mont Blanc fountain pen as a welcome gift,
but I think he was more impressed by the spoon.
‘It’s almost like a knife!’ he said…”

We can almost see Berry turning toward us at this point, eyelids hooded, eyebrows raised. She continues:

“…The biographer
is a coffee nut and I use this fact to bond with him.
‘Oh, Robusta,’ I say dramatically when I know
he’s listening. ‘You inferior bean’…

…That day my mouth felt wetter
than usual. I asked my biographer to check. He used
his tongue. ‘This may affect results,’ he said.”

The final lines are Ashberian in their knowing tone and in their being sharply aware of a reader, a reader willing and able to be the poet’s playmate.

Other tropes to look out for are situational absurdities, touches of kitsch, mordant humour, tense diction, the banal and corporate as symbol and well-handled confessionalism of a lightly sexto-plathic variety.

Even when she seems unsure, she sounds sure. Offering words then taking them back, repeating them, swallowing or replacing them, as in “Letter to Husband”:

The gaps here are far from arbitrary, they control the pacing and the music perfectly. Berry has constructed (her control of her material is clear in its consistent voice and sensibility) an “I” which, in turns, twitters happily/sadly, snorts with adolescent shame, bubbles away vacuously before sharpening and becoming steely. A sort of girl-woman who’s doing all the thinking while the dear boys are snoozing.

I’m reminded of a Playboy cartoon depicting a woman reading on a beach and a man lounging nearby, with only an ever-tightening spiral of tracks in the sand around her to show his clandestine progress. In this case the gender roles are reversed.

You won’t even realize Berry has put the needle in your arm until it’s all done:

“I went swimming with the Doctor;
he wore his stethoscope and listened
to the ebb and flow. ‘Bad line,’ he said…

…He straps his Velcro cuff to my bicep
and pumps it till I’m breathless.
‘You need to breathe more,’ he says…

…He slapped my face with his penis…

(from “The Incredible History of Patient M.”)

(from “The Value of Submission”)

“We agreed small waists were more attractive;
we were in a loving and supportive relationship…

…I use only the top half of
my lungs; there’s just room to breathe. I’ve still got
more than enough. I’ve realised how little we need.”

(from “A Short Guide to Corsetting”)

There’s always a next thought to be voiced in Berry’s poems, she can’t keep it in her pants, “it” being her next thought, the next piece of seemingly trivial information:

“Katie and I
did Edward Scissorhands with chopstick wrappers.
When the food arrived it looked like it was moving
and I absolutely freaked.”

The reader almost expects a “LOL“ to follow that.

There’s a hipness to all this chat, not so much in the mentions of sushi, experimental theatre and Edward Scissorhands as in the breezy confident tone of a poet who expects the reader to know that robusta is inferior to aromatica, seriously, after spending all that time in S*****ucks. ..and if the reader doesn’t know, well, there always be google.

Yet there is depth here. This generation of British poets are the first to have grown up almost completely in the age of the internet and easy access to every kind of information available. Therefore: a poetry of reference, and of references to references, of archness, sometimes employing irony and presenting it as guilelessness. Despite the fantastical stories and fairytales there is narrative here, disjunction between lines and images are kept at a minimum. Berry is able to unfold an idea without relinquishing herself to A.D.D.

There’s a beautiful example in “The Way You Do at the End of Plays”, relating an awkward first date, both man and woman are rather socially inept and unable to communicate with each other. They go to the theatre. Related from the woman’s point of view, the date becomes easier as they watch the performance:

“…Which was like a circus, and a
cabaret, but also sort of like a fairytale, with clowns and men
dressed as women and spankings and beatings and y-fronts and
fake genitals…”

The performance ends with the two lead actors swinging from the ceiling by their belts “like babies” while trying to bump into each other somewhere in the middle of the air so they can kiss, eventually succeeding before bouncing apart. As Berry writes, the image is beautiful, clumsy and funny, a kind of oh-hokey-cokey-cokey
for adults and really quite a precise metaphor for the average romantic relationship:

“…we turned to each other, you know in the way you do at the end of
plays, and I couldn’t stop thinking about them bouncing together
and apart in this amazing, crazy, awkward way.”

Sentimentality is always underpinned by her intellect, Berry never gushes, her language mimicking the movement of her mind: here hesitant, there mickey-taking, now serious.

This is good stuff: intelligent, yearning poetry spoken in a steady voice which gains the reader’s trust early on. Very rarely does she commit the cardinal sin of Being Boring, which is not to say that the poems are throwaway, entertainment pieces. Rather, they respond well to a bit of work on the reader’s side, releasing, like a good single malt, some pleasingly complex notes. Read it by the fire with a good cigar, then.

From a book of forty poems a reader may expect to find one or two real gems if the book is any good. There are a number of fine poems here and I counted five gems.
You may count more or less.