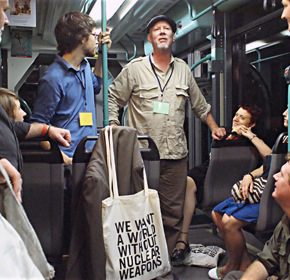 THE PRISON LIBRARY HAS SHIRLEY’S THE LOTTERY

All these kids today playing competing gangs of robbers, nylons stretched over their heads, faces. Our lives are moving at such profound speed that in bed we can only kick back and hold on for dear life.

Spade Russian beards made a synchronized comeback that fall, reminding me to actualize my grooming. If every guy looks alike, who’s who on the wanted poster?

I voted to double-back for another close shave, but she knew which discos ask no questions, plus she could blow the safe afterwards. My deep-down riper half !

It was the false bloom of the bad peach that does not fall from the tree, ever. Today we are two hundred and thirty-four prisoners packed so tightly into the library that no one can turn a page independently: precisely, everyone must do so upon the same dong.

For the rest of my sentence I shall re-read Shirley, mumbling remotely under my breath: »Any story that takes the law into its own hands cannot be all bad.«

What I don’t need is some wiseguy in front of me going, »Wow.«

Murphy, Finn’s father, badly loved to drink beer and net smelt, and one bastard, roaring autumn night above the last mean plummet to Lake Superior, he was swept without a cry to a premature death.

Teagan has never considered herself one. For a brush she urges her fingers through her knotted, curly hair. A local creation myth figure, Teagan keeps the myth in shape at Leo’s. (Klaus Lemke, who created The Klaus Lemke Girl, his eyes all over Teagan, suggests from behind the hand weights that a grotto be stationed near the door for those Leo’s people who just wish to pop off the U-Bahn, remove their textiles, and soak.) Two local Irish music crime lords – Spanish Paddy and Frenchie Barney– are said to protect their innocence by keeping Teagan switched off behind the bar of their Munich Irish pub each Thursday through Saturday night (only flipping her on when the Polizei pour in).

Come Saturday, Frenchie Barney has the honor of welcoming, »The Last End User and the Last End Users!« In her fur coat, not for the first time in history, Teagan makes the night rain men. Her smile sparkles like a surprise Irish satellite that gained orbit against all gods. Teagan is never a woman who spends each morning a month before the mirror, feathering eye shadow, repositioning the beauty mark, squeezing around the pushup bustier – no, she takes a tidy sniff and if it’s not dirty she tosses on the first thing from the floor. (Beneath a fur what doesn’t appear essentially brilliant?)

The Last End User (he wants to pour himself into Teagan’s inner ear, right there where her cochlea converts vibrations into the auditory stream her cortex grooves on) spills forth an aphrodisiac incorporating »the groan of Maud Gonne, three nose hairs from the cook, the laughter of a leprechaun, and a dripping satchel of Lake Superior smelt.« (The Last End Users have little interest in listening to old tapes, for they just bring up again what Finn was »trying to realize on that particular night«.)

Naturally nothing works until nothing naturally does its work, slipstreaming Teagan into her after hours, Egyptian ensemble: white tunic and sandals. Originally she was somewhat divided about moving to Munich. (On how many nights has she multiplied that feeling by apologizing about Clancy, the joke neighbor’s Jack Russel?) Rubbery noses line the tables. Beneath the bargain eyes of Spanish Paddy and Frenchie Barney, Finn and Teagan must talk in code.

Plutarch relates that Antony and Cleopatra engaged in a bi-weekly fishing tournament. The Roman continually lost, for Cleopatra was a shrewd angler. Then Antony devised the subterfuge of having his divers covertly hook trophies of the deep onto his lines. Antony won six fishing tourneys in a row.

The series came to an end once Cleopatra spotted the unseemly Nile bubbles. She sent down her own divers who replaced the Roman’s fishing trophies with gutted salt herrings. Upon pulling in his lines, Antony’s bright laughter turned into something dark that he was forced to swallow.

ELDON (CRAIG) REISHUS is immersed in a personal witness relocation program outside Munich beneath the Bavarian Alps (Landkreis Bad Tölz –Wolfratshausen). He is a ghostwriter for hire, all-around web and print media pro, and the translator of a broad score of films and books. He originates from Fort Smith, Arkansas. Visit him here.