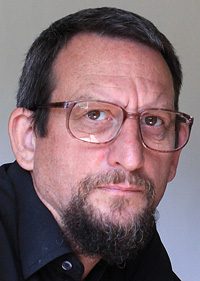 in the necropolis
countless small artefacts
of undetermined age & use:
the broken steering-column
of a 1968 Ford
a double-edged knife
intricately worked blade
cut & shut
practised as an intimate deception
under the fingernails
traces of blood
roughly sloughed skin

fissile plutonium has a half-life
of a thousand human generations

Thirty-five years after the appearance of his first poetry pamphlet, Aidan Semmens’s second collection, The Book of Isaac, formerly shortlisted for the Crashaw Prize, is out now from Parlor Press / Free Verse Editions. Based obliquely on Russian and Jewish history, and the part played by members of his own family in the build-up to and aftermath of the Revolution, it is a sequence of 56 ‘distressed’ sonnets. An anthology of poetry from the English county of Suffolk, By The North Sea, edited by Aidan, will appear in 2013 from Shearsman Books.
____________________________________________________________________