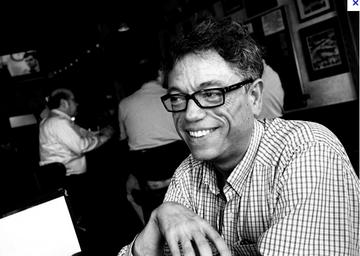 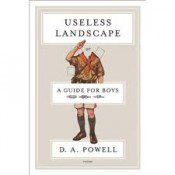 Useless Landscape, Or A Guide For Boys
By D.A. Powell
Graywolf Press, 2012

“Read D.A. Powell. He’s weird, but he’s good.” These were the sentences that introduced me to the poetry of D.A. Powell, shortly after he’d published his first book, Tea, in 1998. Weird, but good. Are there any other adjectives separated by a comma and a conjunction that could be more complimentary to a poet? Well, perhaps weird and good, but in any case, I was impressed.

After Tea, Powell released Lunch (2000), Cocktails (2004) and Chronic (2009), which garnered the Kingsley Tufts Award and was nominated for a National Book Critics Circle Award. From the begining, Powell’s voice was distinct, a “weird” mix of high and low language, camp humor, Hart Craneish vocabulary, AM pop radio references, and much more. In Powell’s fifth book, Useless Landscape, Or a Guide for Boys, the poet is as quietly multitudinous as ever, as exactingly focused, as heartbreaking, confounding and hilarious, and also more pastoral. This is a tongue-in-cheek (and-other-orifices) guidebook to a poetic wilderness, and a peculiar sensibility.

And yet Powell is not above playful abandonment of his readers. “Seven Sketches from a Landscape, Unfinished” ends:

The rains still bring the rivers to a crest.

[Here’s where you imagine the rest.]

A little daring which the title suggests only in hindsight. This subtle playfulness is present throughout the collection. Powell is a shape-shifter, or, better, a microphone collector, with many voices to call his own. His style seems in some ways more restrained here, slightly more sparse than in earlier work, but it remains lush.

Many of Powell’s concerns remain in this collection, specifically the gay experience, and the AIDS epidemic, which was a primary focus of some of his earlier work. Even when Powell is investigating familiar territory, however, his approach to his subjects is always revelatory and metamorphic. A short lyric, “Valley of the Dolls,” is one such example. It begins:

9 o’clock. Time to smoke a joint
that lets me take my pills.

I call them dolls this time.
I take my dolls …

The glancing shift, here from pills to dolls, is a gesture that takes place throughout this collection. Powell delights in double entendre, and emotes a paradoxically subtle campness. His voice often flits between in-the-know audacity: “Nuts are always nice/ though they may need grinding,” and spiritual earnestness: “But after all, it’s heaven/ Even death will be forgiven.” It is to Powell’s credit that his range is so vast.

Many of the lines in this collection are shorter than those of Powell’s earlier work. And the stately stanzas of many of these poems are far from the more abstract shapes of his earlier stanzas. But these lines are not curtailed. And even when Powell is describing nature, his language maintains its urbanity. If these poems were buildings they would be neon and urethane baroque churches, or perhaps hospitals. Mark the third and final stanza of “Bidwell Park,” which begins:

Thus he would peer the woods, and quarry eluded him,
sloughed that lustrous hide and slipped innominate away.
Retraction: there were times he stood the corsair’s nip,
gained midnight’s reticent stroke, the haphazard coitus
of loaded collegians stumbling the poison oak. […]

Useless Landscape has psalms. Some are addressed to nature, such as “Almonds in Bloom,” “Cherry Blossoms in Spring” “Bugcatching at Twilight,” “Orchard in January.” Others, like “Ode to Joy,” and “Mass for Pentecost: Canticle for Birds & Waters,” the poem that closes the book, are more overt in their use of religious vernacular. This last poem shows Powell at his most spiritually rhetorical. It is a triumph of language and spirit that seems a 21st century Gerard Manley Hopkins. And yet more.

And where the water and the air divide, I’ll take you there.
The levee aureate with yellow thistles.
White moth, wasp and dragonfly.
We could not wish unless it were on wings.
Give us our means and point us toward the sun.

And yet, many of the poems in Useless Landscape are what Hopkins, a Jesuit priest, would have called, well, filthy. (The views expressed by Gerard Manley Hopkins are not necessarily shared by B O D Y).

I can only give you back what you imagine.
I am a souless man. When I take you
into my mouth, it is not my mouth. It is
an unlit pit, an aperture opened just enough
in the pinhole camera to capture the shade. …

You understand: I understand you. Understand
each jiggle and tug. Your pudgy, mercurial wad.

How does one recover from such music? The answer to that question lies in Powell’s next collection of poetry. What is sure is that Useless Landscape, Or a Guide for Boys is an impressive followup to Powell’s earlier collections. If this landscape is useless, it is only because it acheives that Wildean quality of perfect uslessness to which all great art aspires.