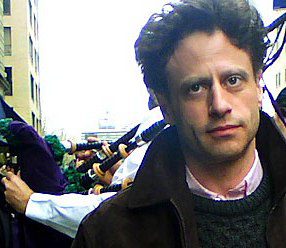 Miasmal afternoons in run-down shade
of clutter and rickety porches, smells of sex,
and filthy carpets, loose floors, leaning walls,
interminably appointmentless and stale,
in summer we holed up in a quiet street,
you graduated from Harvard, me with no course,
Hart Crane reborn, you were obsessed
with The Mountain Lion, with Boston Adventure,
we smoldered in some vision of the past,
green broken bottles shining by a fence
beat up and weather worn, dreams of sailors
drunk on leave, and stifling with beer,
sweating the heat, lagged on a sagging couch,
springs broken and collapsed, the curtains drawn,
and saw receding from my distant childhood
an old film I’d loved from fifty years ago,
The Strawberry Blonde, a vision of the past
itself, set at the turn of the century,
in which James Cagney tried to keep the girl
well at a distance, a shocking suffragette
who knew no bounds, whose eyes had lit on him,
stirring strange oppositions in his soul.
But she was true, and quite beside herself
gave up a little of her shocking ways
until he cursed himself for being hooked.
And yet they married, and lived long happy days.
Not so for us, who fought like cats and dogs
all summer over sex, over illusory slights,
hysterical, till we went our separate ways.

BEN MAZER‘s most recent collections of poems are Poems (The Pen & Anvil Press) and, in India, Tales of the Buckman Tavern (Poetrywala). His poems are widely published in international periodicals, including Harvard Review, Stand, Agenda, Poetry Wales, Jacket, Verse, Fulcrum, Eyewear, Boston Review, and The Brooklyn Rail. He is the editor of Landis Everson’s Everything Preserved: Poems 1955-2005 (Graywolf Press), Selected Poems of Frederick Goddard Tuckerman (Harvard U.P.) and a forthcoming critical edition of the Complete Poems of John Crowe Ransom (The Un-Gyve Press). He lives in Cambridge, Mass., and co-edits The Battersea Review.

Poem in Eyewear
Poem in Jacket
Poem in Scarriet

PrevPreviousFriday Pick: Anthony Madrid’s I Am Your Slave Now Do What I Say
NextJan TěsnohlídekNext