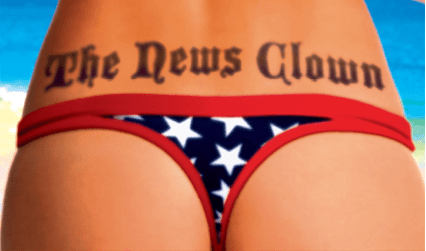 Reading Thor Garcia’s first novel The News Clown on the metro from Jiřího z Poděbrad to Skalka last week, I realized three things. The first was that I had been reading nonstop since my journey from work began at far off Nové Butovice. The second was that I had been snorting laughter through my nose the whole way. The third was that the old lady sitting opposite was now staring at me like I was dribbling and drinking Jelzin vodka from the bottle.

Thor Garcia has written a satirical novel that brings to mind the best bits of John Kennedy Toole’s A Confederacy of Dunces; the novels and short stories of Charles Bukowski; Bret Easton Ellis’ American Psycho and the gonzo journalism of Hunter S. Thompson, all made to feel at home within the unique, effortless likeability of Garcia’s own literary persona.

The main character is the writer’s namesake, a hard-drinking, lady-loving, young and hungry protagonist named Thor Garcia who has joined Cities News Services as a reporter and, for his sins, gets to cover the bloodiest scoops on the streets of Bay City.

Garcia laces the main events of his protagonist’s personal life together with mad sprints to horrific crime scenes, news articles full of political obfuscation over the war in the Middle East, misinformation, senseless murders, oddities and social tragedies – all set against the backdrop of the wider world going to hell. Bizarre characters with bizarre names (think The Goon Show or a Peter Sellers’ character) slouch through the pages of The News Clown, including the president of the United States, one Wolfgang G. Mnung whose efforts to stop a despot from building a supercomputer from a stockpile of 4, 000 playstations is central to Garcia’s tale. Some of the snippets of news and interviews, liberally mixed through the book, lean toward the heavily sarcastic. Here, a studio clown goes live with an embedded news correspondent:

“CLOWN: Dr. Assistant Undersecretary, Reverend Samuelly, sir…if we can, for fairness’ sake, talk a little bit about, perhaps – oh, some of the criticisms of this war, particularly from the minority in this country who, well – they say this is the wrong war at the wrong time, for the wrong reasons, for example. That we should not be provoking war and invading foreign countries many miles from our shore who do not threaten us. Are they mistaken?

“CLOWN: I would say so, Flip…if you oppose freedom, you are clearly mistaken. If you oppose hunting down this dictator’s deadly weapons and defending civilization from terrorists you are certainly mistaken…“

“CLOWN: Reverend Samuelly, sir, another potential criticism – that this war is about, say, stealing resources from another country… That, you know, well, these really aren’t the same folks that attacked us on September 11, 2001, and they don’t really threaten us, but rather- that it’s about, say – oh, I don’t know, quantities of oil they may possess…

“CLOWN: …Whatever this war is about, it is absolutely not about seizing control of vast oil reserves so such reserves can be used as a lever to exert decisive regional and global influence, as we see fit…“

Elsewhere in the book various people fall asleep next to other people’s assholes, fall in love with gorgeous lawyers, become mildly jealous of Val Kilmer and, importantly, ask the questions that need to be asked.

Garcia’s Garcia is the ultimate man about town, morally bankrupt yet pure of faith, one eye on the ladies and booze, the other on the bullshit.
The News Clown is a portrait of a society falling in on itself from top to bottom and vice versa: a serious novel full of laughs that  makes its points effectively without hatred or spite. Highly recommended.

Buy The News Clown by Thor Garcia on Amazon or from his publisher, Equus Press. Available elsewhere via GoodReads.

Other books by Thor Garcia: