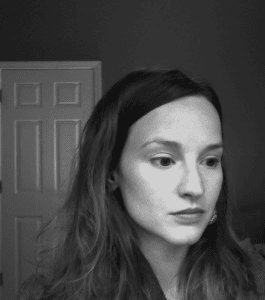 I have exhausted the house’s glass:
the wool-dressed windows,
the mirror stapled above
the bathroom sink, the old vase

gathering dust in the garage.
From what I could make out,
the sea was heavy as mountains,
empty of ships tanked full of wine

and olives brisk with
the salt of ancient fish.
I had to open a window to see it—
is it known that the sea

at certain depths hangs like tar?
So thick you could rake a fork
through, and the parted water
only with difficulty folding back.

This house has a thinness,
a transparency
like old skin pulled taut
over veins, curving bones.

There are no sails billowed
or coughing in the wind—
the horizon’s as bare
as a waxed shoulder.

LANDSCAPE WITH CAIN AND ABEL

A greasy ham hock, a bouquet of carrots,
only one brother’s sacrifice a sacrifice,
his blood congealing like gallstones

that bend the rotary blades of the plough,
that bruise the draft horse’s frog—
tender V of the under-hoof.

It’s tough to manufacture the garden.
It’s tough to walk away without limping,
to carve a shield, a cranny of dirt

from stream and stone, to signify what was lost
or never lost, only coveted as lost
through the turmoil of its making—

mountains shaved down to undulating wheat,
thorn bushes planted under windows that
burglars or murderers wouldn’t bother to straddle.

Mud in the nails. Mud on the feet. Coax
water to land or land to water, admire
the neighbor’s tulips that blush as if strangled.

An unsmashed window. It arrived
cumbersome and clear. My father stumbling under its weight:
the veins of his forehead like lightning as the house shook
from its last silence. Already, the scratched voices
in my ear: the auctioneering lilt of newscasters
driving up the bid on catastrophe, the taste of Avalon cigarettes,
of flood waters, and the President’s sweat with his
“public address apparatus” and “two silver horns”
stocking up a world of elsewhere. Even gospel songs
out-bellowed the rooster who no longer clocked
our hours. His monarchial comb limp while the radio’s static
crowned the henhouses. Dragging his wings, poor boy,
though they said I imagined it. A song stuck in his throat
as the dawn awoke with her rose-red talons, and I learned
to sleep with my ear towards the sky.

L.S. MCKEE’s work has recently appeared in Ninth Letter, Gulf Coast, Indiana Review, New South, The Rumpus, and The HillVille. She received her MFA from the University of Maryland and a Wallace Stegner Fellowship in poetry from Stanford University. She is currently at work on a novel and a book of poems based on WWII-era radio broadcasts in Appalachia. She lives and teaches in Atlanta.

The Rumpus
The HillVille
Review of War Music in the Rumpus